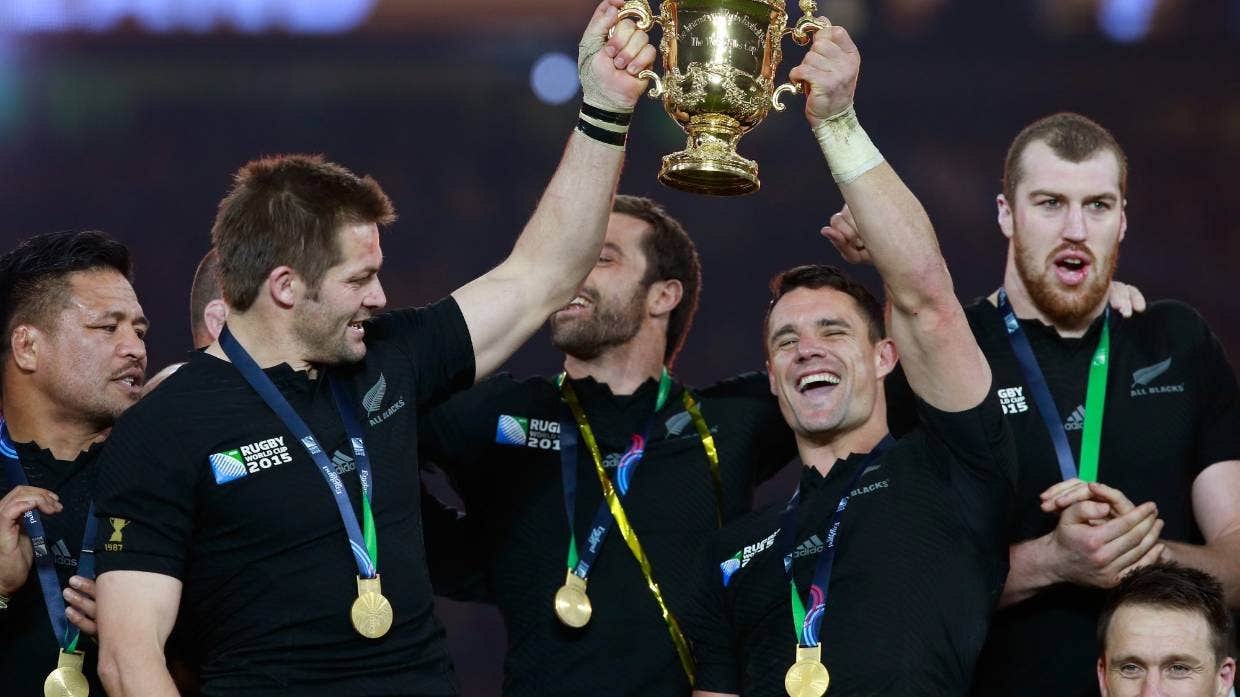 All Blacks great Richie McCaw has a high opinion of the ability and character of long-time team-mate Dan Carter, and explains why in the foreword to Carter’s book, Dan Carter 1598, a pictorial history of the mercurial first five-eighth’s career.

When it comes to summing up the immense contribution Dan Carter made to the All Blacks, it’s not so much a question of what to say as it is where to begin. Such were his extraordinary talents.

Watching from the grandstand, as I did back in 2003, I could reflect on that commanding test debut against Wales in Hamilton. He was just 21 years old. Or I could talk you through what it was like to observe him at close quarters at Wellington in 2005 as he almost single-handedly dismantled the British & Irish Lions.

Then, of course, there was the 2015 Rugby World Cup. His performances throughout that entire tournament, but most particularly at the latter end – the business end – just served to underline what the All Blacks coaches always knew; what I always knew: that if he got his body right and his confidence was high, he would be the man to guide our fortunes. And so it proved. Free from the injuries which had dogged his career over the previous four years, the Cup final victory over Australia became his crowning glory, a match that rightfully assured his place in history as one of the greatest players of all time.

In between those two exceptional matches which bookended Dan’s career was another game that stands out, a game that, to me, really sums up his remarkable contribution to the All Blacks. It was a Bledisloe Cup encounter in Sydney in late August 2009. Crucially, Dan was playing his first test for the All Blacks since rupturing his Achilles tendon with Perpignan more than six months earlier … and we were coming off the back of consecutive losses to South Africa.

With a couple of minutes to play, and trailing by two points, we were awarded a penalty. It was deep in Australian territory but wide out. By Dan’s standards, not a really difficult kick. Brad Thorn certainly thought the game was over when he started fist-pumping and leaping around before DC had even lined up the shot. That’s when I had to remind him that the kick still needed to go over. I never liked to get ahead of myself on the footie field, but I guess for a lot of people Brad’s reaction was almost a natural instinct: you see Dan, you see posts, you see points. DC, of course, nailed the kick. It’s a memory that has always stuck with me.

I’m sometimes asked what it was that set Dan apart from other players. When he first came into the Canterbury environment back in 2002, there was a bit of talk about this new kid and what he could do. While I personally didn’t know too much about him, a haul of six tries in his first three matches told me he was no ordinary player.

Off the field, there was something special about him, too, something about his demeanour. Of course, he had the skills, but on top of that he was eager to learn and he didn’t get carried away. He bided his time. He listened and he never became cocky.

There were no obvious weaknesses in Dan’s game. When he came into the Crusaders set-up, there was one particular facet of his game I quickly learned to appreciate. As a loose forward, I had always been used to ‘cleaning up’ players coming down that first-five channel. With Dan there, though, he’d always get up onto the tackle line. It was an enduring skill throughout his All Blacks career. Never scared. Never shirked his work – he revelled in the physicality.

I don’t think I need to comment on the attacking side of his game, or on his kicking. He was a master. And, as time went on, he also learned to trust the guys around him. He became confident, too, in making the on-field calls and running the game. He wanted to run the game, wanted to drive the game. And as a captain, that’s exactly what I wanted.

One of the great tragedies in his career was the injury that forced him out of the 2011 Rugby World Cup. In the pool match against France – my 100th match for the All Blacks – he was unbelievable. He had the ball on a string that night at Eden Park and I remember thinking, Wow, if he carries on like this, we’re in business. It wasn’t to be …

That’s why I was so pleased he got to end his All Blacks career on such a high note; being able to perform at the very highest level on the greatest rugby stage of all after going through real pain along the way. That, too, is what sets him apart. It’s a measure of the highly disciplined man he became.

Looking around at other first-fives who’ve played the game, I don’t think anyone has come close to being the all-round player he was. Sure, you might find comparison with parts of his game in other players, but you put everything together … well, in my opinion, he’s streets ahead.

Suffice it to say that having Dan Carter in the All Blacks always made my job easier. I feel very privileged to have played alongside him and honoured to be asked to write this foreword.