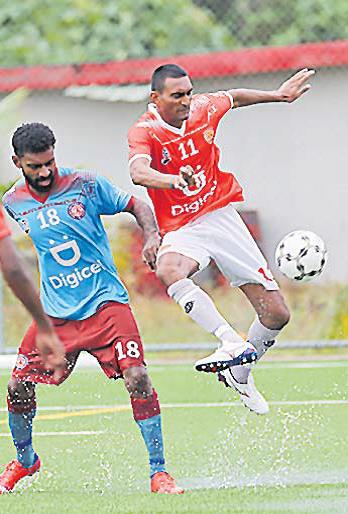 The Rewa football side maintains its unbeaten run in the Digicel Premier League after a hard-fought 2-1 win over Nasinu at the Uprising Sports Centre in Deuba on Sunday.

The Marika Rodu-coached side now has 29 points and sits on top of the points table while Nasinu remains at the bottom of the table with eight points.

Both teams tried to break the deadlock in the first half with equal opportunities but the wet conditions disrupted the style of play by both teams.

Mereke could have put Nasinu in front in the first spell but his shot was saved by Rewa goalkeeper Mohammed Alam.

Rusiate Matererega had a few golden scoring chances while youth player Neemish Prasad stood out as well for the Delta Tigers in the first half.

Rewa returned a different side after the break and it took them 11 minutes to break the deadlock with captain Setareki Hughes taking advantage of a defensive blunder to put his side up by 1-nil.

The Rewa side brought in Tevita Waranivalu, Samuela Nabenia and Abu Zahid who lifted the tempo.

Despite Rewa’s 2-0 lead, Nasinu kept fighting and managed to find the back of the opposition net when Jonetani Buksh headed home a beautiful goal after timing a Mohammed Shazil Ali cross.

Rodu says the team will need to step up as the competition is getting tougher.

Nasinu coach Nathan Shivam said he was not disappointed with the performance of the team but the result was not in their favour.

“We had a couple of new players coming in and we managed to perform well but the wet weather was not in our favour and we could not execute our game plan,” Shivam said.

“Readjusting to the new conditions is another factor so we are still building our team and definitely we will come out strong in the next game.”