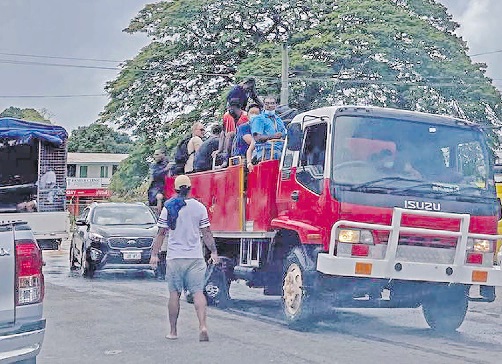 The Tourist Response Team was put together to assist visitors make their way to the Nadi International Airport on Monday when heavy downpours affected the region resulting in widespread flooding in the West. Picture: BRENT HILL/TWITTER

Tourists were among those in the Western Division trying to battle through floodwaters on Monday when heavy downpours affected the region resulting in widespread flooding.

According to Tourism Fiji, a Tourist Response Team was put together to assist visitors make their way to the Nadi International Airport.

“There was an incredible team effort, as always, to ensure tourists were looked after and got on their flights, were assisted to find accommodation and got their tests in time,” Tourism Fiji revealed in a statement to this newspaper.

“Tourism Fiji has a Tourist Response Team who responded magnificently, quickly and efficiently to the many requests that came in from very early in the morning to late at night, as everyone worked together to ensure people met their flights.

“We want to commend the work of Fiji Airways, Fiji Airports, the tourism and transport industry and many others. It was a great team effort and very typically Fijian.

“There were floodwaters at Sabeto so that cut off anyone coming from the Sun Coast or Lautoka.

“Also, there were multiple closures due to floods on the Queens Rd impacting the Coral Coast, Natadola and Momi Bay resorts and even Denarau resorts were restricted for a time.

“There were a number of solutions talked through as the team collectively – including the maritime tourism industry – came up with solutions.

“We had many guests on early flights, which needed test results as well as transfers to meet their flights.

“I’m really pleased to say that the vast majority who wanted to leave were able to and that is testament to the real teamwork involved by everyone.”

According to the organisation, emergency services were enlisted to assist in transporting tourists to the airport.

“Their safety is absolutely paramount and it was incredible to see fire, police and military on hand to assist.

“There were some amazing stories of tourists hitching rides on fire trucks, military vehicles and the like to get across waters that, otherwise, were impassable.

“The team involved right across the board kept in constant communication and did the job that was needed efficiently and safely.

“I have received so many notes of thanks from tourists to Fiji. They are so appreciative of what was done under difficult circumstances.”