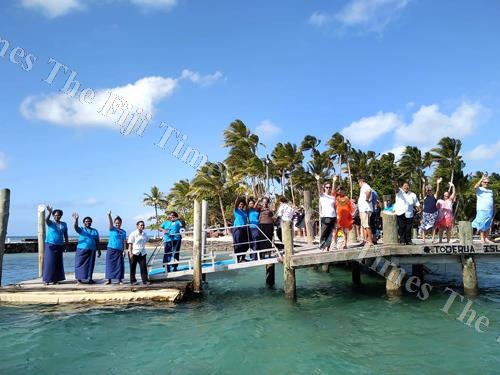 TOBERUA Island Resort prides itself in its rich history background and being a family-owned resort.

Unlike many resorts in Fiji, Toberua stays true to everything authentic and with it, offers guests the finest Toberua charm.

Owners Joanne and Glen Inger have raised the bar in developing the resort and have even made it one of the most eco-friendly resorts in the country.

Ms Inger said when they had decided to buy Toberua they originally had big ideas of modernising the resort.

“Quite quickly we realised that it shouldn’t happen and that the Toberua charm needed to stay,” she said.

“We decided that we would upgrade it, but not modernise it because it would lose that special Toberua charm and it had to remain Toberua which we have achieved.” She said the staff members were the ones that made Toberua special.

“The staff can remember all the guests’ names when they visit and when they see our guests arriving they get excited especially with the returnees,” she said.

“They remember every single person that has ever been to the resort, which is just wonderful.

Mr Inger said they have had successful businesses in retail and he was the founding director of the Warehouse Group in New Zealand.

“I retired from that after 24 years in retail as a CEO of the Warehouse Ltd and I decided we wanted to do other things, spend a bit of time with family because I had 24 years of just working flat out seven days a week,” he said.

“So we started looking for something and I had a passion for farming, so we’re into various farming ventures in New Zealand and Australia too.

“Farming is really my passion and not Joanne’s so I did that and she said she wanted something for herself because our four children had all grown up then. “Joanne had a successful career before we had the children and then she gave that up for our four children.

“Then we brought them up together and they have done very well and are all in university, so they’re all doing their own things now.”

He said Joanne wanted to do something and so they thought about doing something in tourism and hospitality. “We looked into several things, we nearly bought a resort called The Pearl now known as Aitutaki Lagoon in the Cook Islands, but there was a few things that came out of due diligence that needed sorting and the owners weren’t prepared to do it so we pulled out,” he said.

“Then we looked at various resorts in the Pacific and here in Fiji but none of it had the special effect or something we can stamp our mark on or could invest our time and effort to improving and build on, so we thought to just buy a house in Denarau instead.

“We didn’t like Denarau because it was too busy and the water wasn’t very clean and yes it did have a lot of positive things about it, but after looking at some houses we just said that it was just not for us.”

He said they then had a call from the agent saying he had one more resort for them to look at that just recently came up on the market.

“It was Toberua Island and when we came here there was just something special about it and by the third day we said yes because it had history and was freehold,” he said.

“It needed a lot of work, it needed infrastructure and big investment and we had to put in millions to get it up and going and occupancy was running low and it was losing a lot money then.

“It was a big challenge as well, but I thought we can turn our joint skills — mine around construction, infrastructure capabilities, retailing and understanding the customer which is similar to hospitality and Joanne’s interest in marketing and having good people skills to run the resort.

The couple said they had now tentatively put the resort up on the market and were looking for the right person with the right motivation to buy the resort.

“Unless we find the right person with the right motivation we will still probably own it for quite a while. If someone comes along and has the energy to take it to the next stage you know we will just pass the ball,” he said.

“We have taken it a level up and we have about exhausted all our ideas and maybe the next person with bigger ideas will be able to take it to the next
stage, but until we do sell it, we will continue from 50 to 51 years and it’s all about making it a 100-year-old resort.”

The resort celebrated its 50th anniversary on Wednesday.