Researchers use drones to pilot a new tool to fight malaria 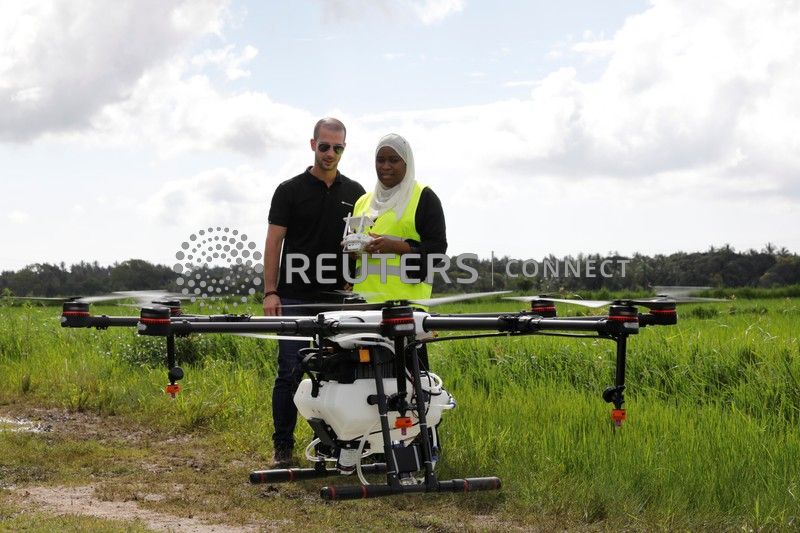 CHEJU, Zanzibar (Reuters) – Scientists seeking a breakthrough in the fight against malaria have used drones to spray rice fields in Zanzibar – not with traditional pesticides but with a thin, non-toxic film.

The fields are typical breeding grounds for the anopheles mosquito – the type that transmits malaria, which the United Nations says kills a young child every minute and causes 75 percent of all under five deaths.

Ninety percent of all cases occur in Sub-Saharan Africa, according to the World Health Organization.

The researchers, led by Bart Knols from Radboud University in The Netherlands, plan to sample the larvae and the mosquitoes in the fields before, during and after spraying it with the silicone-based liquid, Aquatain AMF, to test its impact.

Malawi has used drones to map mosquito breeding sites but the researchers in Zanzibar say preventing pupae and larvae from attaching themselves to the surface of the water takes the malaria fight to the next level.

“By controlling them right at the source we hope to have an impact ultimately on the transmission of malaria,” Knols said.

He and fellow researchers chose Tanzania’s Zanzibar archipelago for the pilot partly due to its progressive laws on the use of drones for research.

“It is very difficult to just walk through the paddies and apply the chemicals, so you want to have something that can just spray it on the water surface. It spreads, does the job and that’s it,” said Wolfgang Richard Mukabana from the University of Nairobi, one of the researchers.

After the trial in Zanzibar, they aim to publish their findings in peer-reviewed journals, they said, and hope to expand the approach across the continent.

The liquid is made by Australian company Aquatain Products Pty Ltd, which says it is highly permeable to gases so does not prevent the water from being oxygenated.