Rescue teams race to save hundreds trapped by Mozambique cyclone 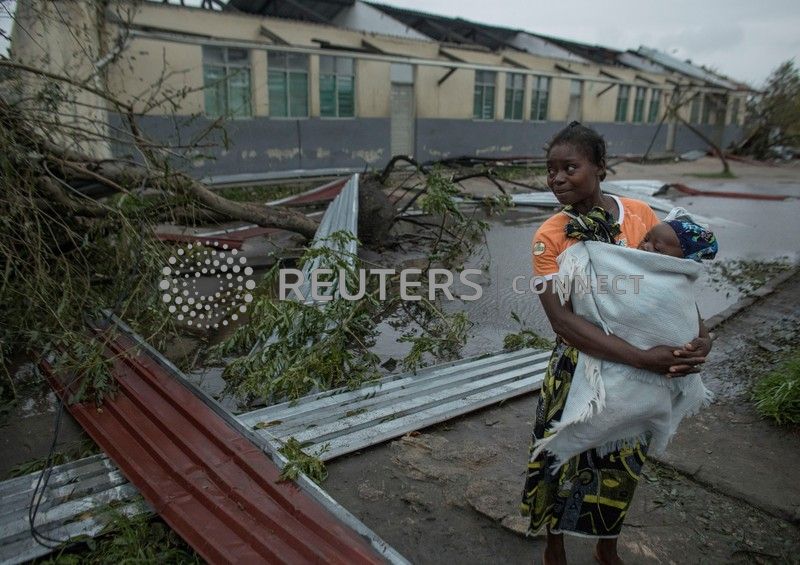 The aftermath of the Cyclone Idai is pictured in Beira, Mozambique, March 16, 2019. Josh Estey/Care International via REUTERS

BEIRA, Mozambique (Reuters) – Aid workers rushed to save people trapped by floods around the Mozambican port city of Beira on Wednesday, after a powerful cyclone killed hundreds and left a trail of destruction across swathes of southeast Africa.

Some survivors were still clinging onto trees or roofs, waiting for rescue teams almost a week after the storm first struck. Roads around Mozambique’s port city of Beira were swamped and it was raining heavily, complicating rescue efforts and meaning aid had to be flown in by helicopter or plane.

Cyclone Idai lashed Beira with winds of up to 170 km per hour (105 miles per hour) last Thursday, then moved inland to Zimbabwe and Malawi, flattening buildings and putting the lives of millions at risk.

At least 200 people have died in Mozambique and 98 in Zimbabwe, but the death toll is likely to rise as rescuers are still finding bodies.

Mozambique, whose tiny $13 billion economy is still recovering from a currency collapse and debt default, has declared a national state of emergency as it faces catastrophic flooding in Idai’s wake.

The worst-hit areas were close to the Buzi river west of Beira, said Caroline Haga, an official with the International Federation of Red Cross. Two rivers, including the Buzi, burst their banks after the storm dumped rain on Zimbabwe and Malawi at the weekend, sending torrents of water into Mozambique and creating a “second emergency”.

Aid agencies changed tack from dealing with a situation mostly involving damage to property and infrastructure caused by the cyclone to facing something much more serious.

“The flooding is completely different in that this is now a matter of life or death,” Haga said.

Rescuers dropped high-energy biscuits, water purification tablets and other supplies to people surrounded by nothing but water and reddish-brown mud on Wednesday, she said.

The floods have also brought the threat of waterborne and respiratory diseases, including pneumonia.

Mozambican President Filipe Nyusi, who declared three days of national mourning starting on Wednesday, has said the eventual death toll from the cyclone and ensuing floods could rise to more than 1,000.

Travis Trower, principal of Rescue South Africa, said many people remained trapped on islands of land around Beira but that the “acute rescue phase” – pulling people from rooftops and trees – was largely complete.

Trower described scenes where mothers passed him their children from trees and crowds of people swarmed around rescue helicopters when they were able to land.

On Tuesday, rescuers saved 167 people around Beira with the help of South African Air Force helicopters.

Portuguese Foreign Minister Augusto Santos Silva said the families of 30 Portuguese citizens in Beira had not been able to contact their loved ones, raising concerns about their safety. He said several dozen Portuguese had lost their homes.

Around 2,500 Portuguese citizens work in Beira, according to the government.

In eastern Zimbabwe, grieving families rushed to bury their dead because the cyclone had knocked out power supplies and put mortuaries out of action.

Zimbabwean President Emmerson Mnangagwa said on a visit to the town of Chimanimani that his government would ensure houses were built with stronger materials in future. Many in rural Zimbabwe cannot afford cement to build their houses, leaving them vulnerable to torrential rain and wind.

Malawi has not released details of casualties from the storm, which weakened as it moved further inland. More than 50 people died in floods the week before the cyclone hit.

Beira, a low-lying city of 500,000 people, is home to Mozambique’s second-largest port and serves as a gateway to landlocked countries in the region.

Drone footage showed residents of a shantytown there picking through wreckage and trying to drag plastic sheeting over their ruined homes. The film, released by the Red Cross, showed the settlement pockmarked with empty plots where whole buildings had been blown off their foundations.

“Great floods have sowed mourning and devastation in various areas of Mozambique, Zimbabwe and Malawi,” Pope Francis said on Wednesday. “I express my pain and closeness to those dear people.”

Aid groups have struggled to reach survivors trapped in more remote areas of Mozambique where some villages are submerged.

The United Nations children’s fund, UNICEF, estimated that 260,000 children were at risk from the devastation, and the World Food Programme said it was trying to reach 500,000 people with immediate food assistance.

The cyclone also knocked out Mozambican electricity exports to South Africa, exacerbating power cuts that are straining businesses in Africa’s most industrialized economy.

The EU, Britain and United Arab Emirates have donated millions of dollars of aid each to Mozambique, Malawi and Zimbabwe for emergency shelters, hygiene, sanitation and healthcare. Portugal is sending 35 soldiers and a team from the country’s National Republican Guard, its foreign minister said.

The United States is sending a team of disaster experts to Mozambique and says it has provided $700,000 to the three countries for damage caused by Cyclone Idai and flooding earlier in March.

Those gas deposits – in an area largely out of the way of the cyclone – could revolutionize the Mozambican economy by turning it into a major exporter of liquefied natural gas (LNG).

Mozambique’s economy slowed sharply when commodity prices fell in 2014 and was dealt another blow in 2016, when the government admitted to $1.4 billion of previously undisclosed loans. The disclosure prompted the International Monetary Fund and foreign donors to cut off support.