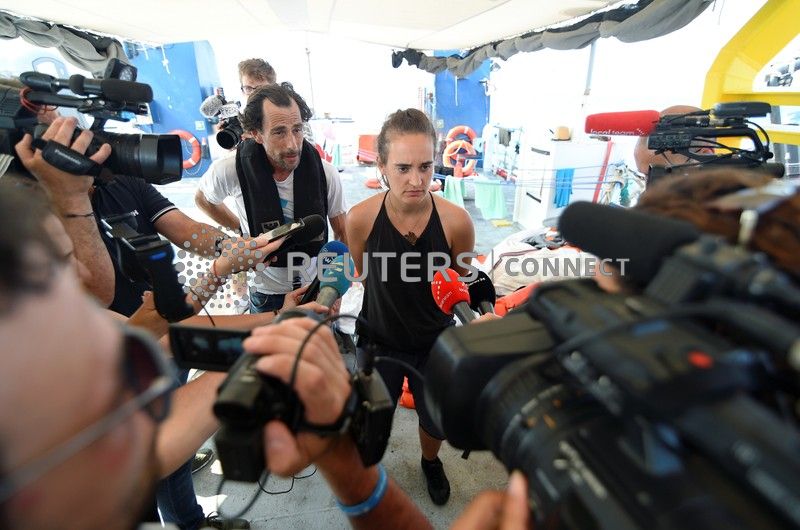 Carola Rackete, captain of rescue ship Sea-Watch 3, speaks to the media as the ship remains blocked one mile outside the port of Lampedusa, Italy, June 27, 2019. REUTERS/Guglielmo Mangiapane

ON BOARD SEA-WATCH 3, Italy (Reuters) – The captain of rescue ship Sea-Watch 3 said on Thursday European states have no interest in finding a political solution for the 42 migrants aboard her vessel, now positioned off the Italian island of Lampedusa.

After 14 days stranded in international waters the captain, Carola Rackete, said she had decided to head to the Italian coast because she felt maritime emergency law permitted the ship to do so.

Rackete, a 31-year-old German, has become a symbol of defiance in Italian media for challenging Interior Minister Matteo Salvini’s policy of closing ports to NGO ships, which he accuses of being complicit with people smugglers.

The captain said Sea-Watch had tried without success since the beginning to cooperate with the authorities, engaging with Italy, Germany, Malta and France and opening contacts with the European Commission.

“It has been made very clear that none of these actors actually has any interest in finding a solution and it ultimately has been us who had to take steps”, Rackete said.

“We have been left totally alone”, she added.

The Sea-Watch 3 picked up 53 migrants from a rubber boat off the coast of Libya and had remained in international waters since June 12. Eleven migrants have already been taken off the ship by the Italian coastguard for health reasons.

Sea-Watch spokeswoman Giorgia Linardi said in a video posted on Twitter that the ship had tried to enter the port but was blocked by police and now stands one mile off the port of Lampedusa.

A group of opposition lawmakers has boarded the vessel and refuses to get off until a solution is found and the European Union called on Italy on Thursday to help find a swift solution for the migrants.

The captain’s decision to enter Italian waters could have legal implications.

According to a decree approved in June, Italy’s Interior Ministry has the power to deny access to territorial waters to vessels that it considers are a risk to security or public order, and impose fines of up to 50,000 euros ($56,840).

“I have a strong trust in the jurisdiction of the Italian state”, Rackete said, when asked if she was afraid of the consequences of her behaviour.

According to Sea-Watch, several fundraising campaigns have raised about 200,000 euros to support legal expenses that the crew could face.

“I am very sure that the Italian courts will find out that the life and the safety of the people rescued is much more important”, Rackete said.