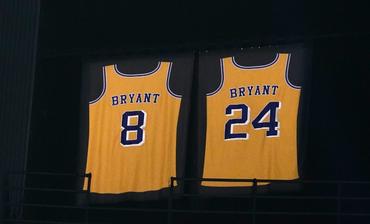 All eight finalists for enshrinement in the Naismith Memorial Basketball Hall of Fame, headed by the late Kobe Bryant, will be inducted, according to various media reports Friday.

The other reported members of the Hall’s Class of 2020 will be Tim Duncan, Kevin Garnett, Eddie Sutton, Rudy Tomjanovich, Tamika Catchings, Kim Mulkey and Barbara Stevens.

Bryant, Duncan, Garnett and Catchings all are first-time finalists. Nominees needed to received at least 18 votes from the 24 electors to be enshrined.

The official announcement will be made Saturday at noon ET on ESPN. The news normally is revealed at the site of the NCAA men’s basketball Final Four, which this year would have been Atlanta, but the entire NCAA Tournament was canceled due to the coronavirus outbreak.

The Athletic’s Shams Charania reported that Bryant, Duncan and Garnett were elected.

The Tulsa World broke the news about Sutton, with ESPN adding that it confirmed the report.

Fox 26 Houston and the Houston Chronicle reported that Tomjanovich was voted in, while longtime women’s basketball reporter Mel Greenberg tweeted that Catchings, Mulkey and Stevens were elected.

Bryant died Jan. 26 at 41 in a helicopter crash. He was an 18-time All-Star, five-time NBA champion, two-time scoring champion and the 2007-08 Most Valuable Player. The Los Angeles Lakers great ranks fourth in NBA history in points, and he was selected to the All-Defensive team 12 times.

Garnett, 43, was a 15-time All-Star, an NBA champion with the Boston Celtics in 2007-08 and the league MVP in 2003-04. He played the majority of his career with the Minnesota Timberwolves and had a brief stint with the Brooklyn Nets.

Sutton, 84, coached Creighton, Arkansas, Kentucky and Oklahoma State to the NCAA Tournament, reaching the Final Four three times. Including a brief stint at San Francisco, he wound up with an 804-328 career record.

Tomjanovich, 71, coached the Houston Rockets to NBA championship in 1993-94 and 1994-95. He also averaged 17.4 points and 8.1 rebounds in 11 seasons as a player with the Rockets, and he was an All-American for Michigan, where he remains the all-time leading rebounder and is second in scoring average.

Catchings, 40, was a 10-time All-Star in 15 years with the WNBA’s Indiana Fever. She was the MVP of the WNBA Finals as the Fever won the league title in 2012, a year after she was the regular-season MVP. She was a five-time WNBA Defensive Player of the Year.