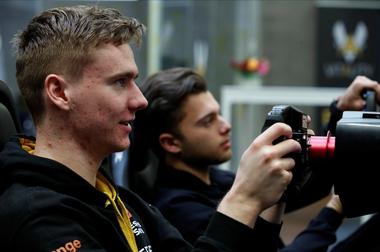 ENSTONE, England (Reuters) – Jarno Opmeer once trained in the Renault team gym as a junior academy driver and now the Dutch racer is back at the factory facility, preparing for a Formula One esports title showdown that he still hopes to win.

The 19-year-old has given up on the neck exercises, of little benefit when competing in virtual races without g-forces. Extreme temperatures and dehydration are not concerns either.

Maintaining physical fitness still comes with the esports territory, however, and is playing a part in Renault Vitality Team’s emergence as 2019 championship challengers.

“Physical training in esports is much more about being healthy, staying flexible because obviously sitting in a simulator for a big part of the day is going to make you stiff,” Opmeer told Reuters.

“You want to stay flexible as much as possible just for quick reactions and coordination,” added the former F4 driver. “In real life motorsports you really want to train to be fit to handle the g-forces, the heat.”

Renault are serious about virtual racing, extending the partnership with French esports organization Vitality and providing support from the F1 side.

Lazy stereotypes of overweight teenagers hunched over laptops for hours on end have long gone.

David Thompson, head of human performance at Renault Sport, has worked with race drivers and gamers alike at Enstone and sees crossover benefits.

“The physicality might be different but it’s a similar scenario in that they need to perform in a stressful and pressurized situation,” he said.

“It does all pay off and it does have an effect. If they are going to feel sharper and turn up to an event a bit more confident, that’s going to have a bigger effect at the end,” said Thompson.

“There are lots of links and crossovers that we try and carry between the two (sides). It’s getting a good response from the guys as well.”

Renault’s esports team benefits from Formula One in other areas, with race car telemetry from the Codemasters 2019 game analyzed by engineers through the same systems used in an operations room on grand prix weekends.

What started off as a small group working in their lunch hours has developed into a serious project.

“From an IT perspective this is our learning season. But into 2020 we want our engineers to treat each esports event as a real race event,” said Renault F1’s IT manager Ben Hampshire.

“It shows the seriousness that Renault is taking with esports… with real world benefits, not just for esports but our actual F1 program.

“We’ve started doing this but by no means are we alone. We fully expect the top three teams in the physical F1 (world) would be doing something very similar to us.”

The engineers can use the telemetry to make suggestions about throttle adjustments and brake bias and provide more variables for setup.