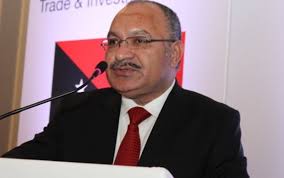 O’Neill said last Friday that successive governments and bureaucracy had been blocking reform and was undermining capacity and had lowered moral in the forces.

“We have waited too long, and listened to too many people who put roadblocks in the way of reform.

“There are so many fine men and women in our disciplined services who go out day after day to do their job, and we want to do everything we can to help them perform to the fullest while ensuring their welfare is taken care of.

“Cabinet will consider a raft of measures that have been identified locally, and experiences gained from disciplined force reform around the world.

“We will begin with separating operational and administrative activities, then refocusing them on core activities and establishing better command and control processes.

“Clear chains of command and accountability are essential in reforming our constabulary,” he said.

O’Neill said one of the most important elements in reform is to revitalise the training programme for new and existing personnel.

“Our police, those in the constabulary now and those who will join in the future, need career-long training.

“From the day they enter the Police Training College their training has to be properly structured and delivered by qualified and experienced instructors.

“When they pass out of the training college they have to be at the standard that they can be fully operational.

“It is a very sad indictment of the previous Government that they closed the Police Training College in 2002 and for 10 years not a single new police man or woman was trained.

“It was only after our government came to office that we reopened the Police Training College at Bomana.

“Recruits are being trained and we will now revamp the training programme to be more in touch with today’s policing requirements.

“The law and order situation in our country, and around the world, is different than it was 10 or 20 years ago.”

O’Neill said these new policing methods must be incorporated into recruit training.

Meanwhile, increasing lawlessness has now put the Police Department under scrutiny on how it has failed to address and contain law and order issues with substantial funding increases in the past six budgets.

Prime Minister Peter O’Neill said substantial budget increases have been given to police and he has proposed a reform to separate administration and operations of the Police.

O’Neill was responding to a separate question from Gulf Governor Chris Haiveta and on the overall government plan to contain the escalating law and order situation with the recent upsurge in crime in Milne Bay Province.

It is not the first time to hear members of parliament complaining of paying for fuel and allowances for operations in the districts and also public expressing frustrations that they pay for fuel to attend to complaints.

East Sepik Governor Allan Bird also raised the questions to Deputy Prime Minister and Treasurer Charles Abel for a reconciliation on where the Police Department of spending the money.

“I am happy for the Prime Minister to mention law and order. What are the targets for law and order and when are you going to report to us about the impact of the 2019 Budget which is K16 billion (US$4.9 billion) on its efforts in law and order,” Bird said.

“Provincial government this year will give an additional K30,000 (US$9,921) a month out of our internal revenue because we want to deal with our law and order situation however, the Prime Minister said a substantial amount of money goes to Police Department, we need a reconciliation of where the Police Department is spending the money when my province is not getting it.”