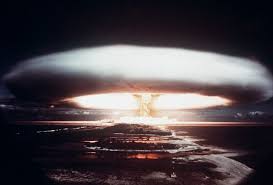 A nuclear test veterans organisation in French Polynesia says there should be special recognition of the military and civilian personnel involved in France’s nuclear weapons test programme.

The group Tamarii Moruroa has written to the French health minister, saying it was time that France gave a sign worthy of its name.

Its head Yannick Lowgreen issued a statement ahead of next week’s meeting in Paris of the compensation committee which will be chaired by the minister.

The French government has to date acknowledged approaches by Tamarii Moruroa and said its concerns were being considered in the process of revising the compensation law.

Mr Lowgreen has called for medals of recognition as well as assurances of care for victims and their families.

He has estimated about 40,000 people could benefit.

More than 100,000 people were involved in France’s nuclear test era in which in French Polynesia a total of 193 weapons were tested.