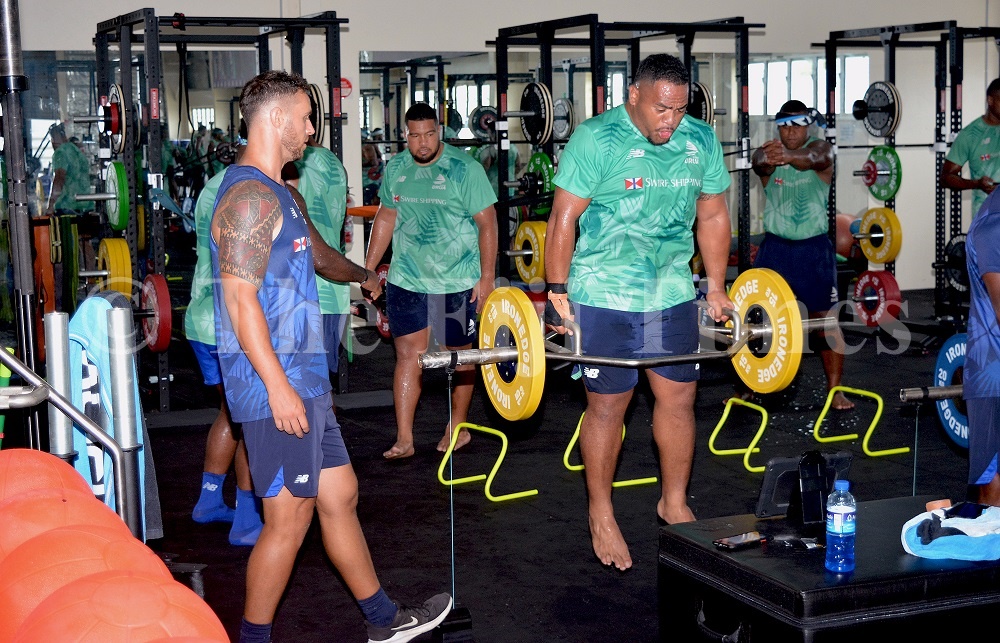 Meli Tuni and team mates during training at the Fijian Drua Home Base gym in Nadi. Picture: BALJEET SINGH

The Swire Shipping Fijian Drua team’s preseason trial match against the Melbourne Rebels at Prince Charles Park in Nadi this Saturday will give an indication of the team’s status ahead of the 2023 Shop N Save Super Rugby Pacific competition.

The Fijian Drua will face Moana Pasifika in the opening round of the competition at Mount Smart Stadium in Auckland, New Zealand on February 25.

Fijian Drua head coach Mick Byrne said it was exciting to have their academy boys in camp. Byrne said there were a couple of new faces in the squad.

“The weather hasn’t been kind to us from a rugby perspective, but I think we have done well around the grounds,” he said.

“We have been looked after well by the International School which has been great. “So we have been able to get on the field and do some solid training.

“The players coming out of injuries are really working hard and they have been doing extra work. They are back running and doing certain activities at training.”

He has joined the side after a short stint with the North Queensland Cowboys in the National Rugby League in Australia.

Byrne said it was good to see the likes of Masi slot into the team.

“As a new guy he has come into the team but all our good players have come back in good shape,” he said.

“Some of our young academy players have stepped up. It is pleasing for them to be training back home.

“For our players to have the facility here and to get the work done I’m excited by where we are at this stage this season to where we were last season.”

The Fijian Drua established its home in Legalega, Nadi worth $2 million last October. Byrne said they would be using the preseason game plan scenarios against the Rebels during the trial game.

“With our preseason program we are really focusing on ourselves,” he said.

“We don’t want to get too caught up with worrying about the opposition at this stage.

“This is because they probably will change things like we will do. The big thing for us is that in this game we are going to bring to the Super Rugby Pacific competition.

“We need to set all the processes in place so when we play oppositions that they don’t know what we are doing.”