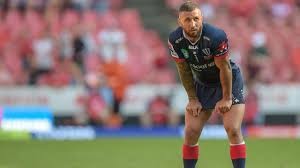 FLY-half and playmaker Quade Cooper said the Rebels don’t need to change anything ahead of their encounter against the Waikato Chiefs at AAMI Park tonight and just need to believe in themselves.

According to The Roar, Cooper, who along with the Queensland Reds won the Super Rugby title in 2011, said the Rebels didn’t need to change anything to their game for tonight.

“For all the players to be able to be in this position, shows we’ve played some great rugby,” Cooper said.

He said the Rebels just needed to bring their best rugby.

Quade Cooper says the team is looking to find that attacking mojo ahead of Friday's match against the Chiefs. pic.twitter.com/LHy7fuIpdj

While the Rebels have made six changes to their starting side, two of which are Genia and Cooper, the Waikato Chiefs have made three changes ahead of tonight’s encounter, seeing the return of Nathan Harris returning from All Blacks leave, Angus Ta’avao the new tighthead prop and co-captain Brodie Retallick back at lock.