Reavie holds off Bradley for first tour victory in 11 years 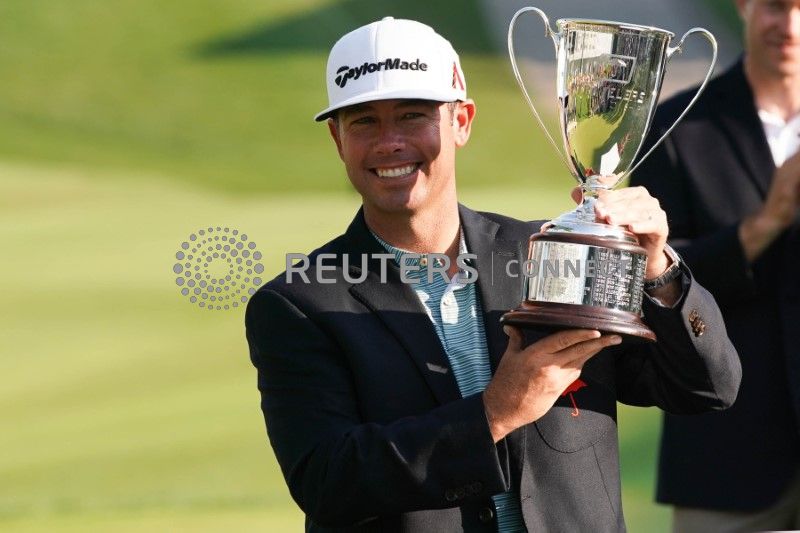 (Reuters) – Chez Reavie took advantage of a three-shot swing at the 17th hole to win his first PGA Tour event in 11 years by four strokes at the Travelers Championship on Sunday.

Reavie birdied the penultimate hole where challenger Keegan Bradley made double-bogey to turn a one-shot Reavie lead into a winning four at TPC River Highlands in Cromwell, Connecticut.

Making mostly pars, the 37-year-old Reavie saw much of a six-stroke overnight lead evaporate but his one-under 69 was enough to see him hang on for the victory at 17-under 263.

His only other PGA Tour victory came at the 2008 RBC Canadian Open.

“It means everything,” Reavie, who had undergone wrist and knee surgery since the 2008 win, told CBS Sports.

“I had to stay patient today. Keegan was playing great and I kept missing putts,” he said.

“Finally I made one on 17 and kind of turned the corner.”

Bradley and compatriot Zack Sucher tied for second at 13-under after both shot 67s.

Vaughn Taylor (65) finished fourth at 12-under, while England’s Paul Casey (65) shared fifth with Chile’s Joaquin Niemann (66) and Kevin Tway (67) who were another stroke back.

Reavie’s victory came a week after he tied for third at the U.S. Open.

He putted well at Pebble Beach and most of this week, but made only two birdies on Sunday, including the big one at 17.

“I felt like I was hitting good putts and they just weren’t going in,” Reavie said.

Meanwhile, Bradley kept making birdies on the back nine just as Reavie did on Saturday.

But the 17th was his downfall as his tee shot ended up in a bunker and he three-putted.

“I ran my next putt by. It was just tough. Wish I could have had that back.”

Until then it had been fun, said the New England native who was cheered on by hundreds of fans.

“I’ve never felt that type of support ever,” he said. “Maybe in a Ryder Cup. It was so fun.”

Sucher, who blew a five-stroke lead on Saturday, made a big comeback on Sunday with birdies on five of his final nine holes.

“The back nine was unbelievable. The whole thing was fun with the huge crowds,” said Sucher who is finally pain-free after a series of injuries.

World number one Brooks Koepka, after a busy stretch that included winning the PGA Championship in May and finishing second at last week’s U.S. Open, also shot 71 to finish at even par.