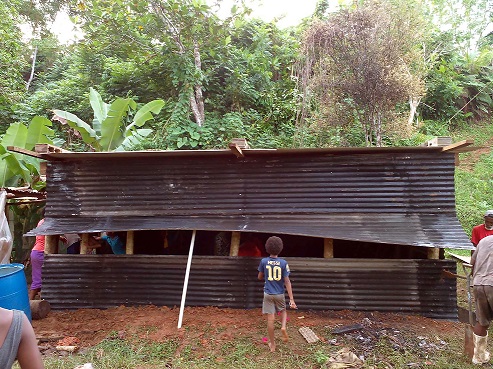 A family stays in a makeshift shack. Picture: FT/File

At first glance you’d be forgiven for thinking it was a chicken coop because it sure looked like one! Several pieces of old rusted corrugated roofing iron had been thrown together in what appeared to be a makeshift hut.

An old flattened out cardboard box that had been threaded with string on one side was hanging masquerading as a front door.

It was flapping gently in the breeze. The place inside was no more than a couple of metres long and there were no tables or chairs.

Or even a bed. It wasn’t big enough. There was no running water inside or a toilet. In one corner, below the low hanging tin roof, was a makeshift open fireplace.

It had two old concrete building blocks that looked blackened and charred from constant use.

A rusted old wire mesh basket, that someone had used a long time ago probably for drying dishes, had been flattened out. It was now sitting over the blocks acting as a cooking grille.

An old charred cooking pot that had seen better days sat uncomfortably at an awkward angle on top of the grille. Beside it sat a faded blue and white teapot with an unusually long neck.

The spout was chipped and cracked most probably due to the extreme heat from the open fire. But also because it was so old. Stacked neatly in another corner of the little hut was a bunch of threadbare bedding.

It had been rolled up in a mat with an old belt tied around it waiting for nightfall. An old kerosene lamp hung limply on one of the side posts holding up the roof. There were no shelves in this rickety rundown shack.

No cupboards either. But it was home for a mother and her two young children. It’s been home for them now since they left their outer island sanctuary hoping for a better life in the big smoke.

But tragedy struck not long after they arrived. Mereseini’s husband died suddenly of a rare heart disease. She couldn’t afford to give him a proper funeral because they had no money.

Her two little ones are only five and three. And she has no one to turn to because she has no family here.

Mereseini longs for the life she left behind on the idyllic island she came from.

Even though things were tough after the big cyclone they still managed to eke out a living because they had a small teitei which kept them going. And they had an abundance of fish and seafood to fall back on.

Even though life was tough on their little island they managed to make ends meet because of their subsistence lifestyle.

And there was so much more joy living with other family and friends around them that they could turn to. But the life she was now living was completely foreign as it was frightening for her.

She had no friends here that she grew up or went to school with. She felt people were different on the mainland. They mostly kept to themselves.

And because Mereseini was poor most people weren’t interested in making friends with someone in her predicament. However there was one person who was a little different from the rest.

She was an older Indo-Fijian lady. And even though she was struggling too, she sometimes stopped by and left them a parcel of roti and some bhagi curry. She was the only kind soul who seemed to care.

The old lady didn’t speak much but smiled a lot and just said, “bula”. As Mereseini sat in the dingy shack reminiscing and sharing her story, a tear gently rolled down her cheeks.

She quickly wiped it away hoping we hadn’t noticed. But she was visibly embarrassed. To help compose herself she gently turned away and looked at her two small children playing with a makeshift wooden truck on the floor.

It was something her husband, Samu, had carved from an old fallen tree. He was good with his hands and did lots of odd jobs around the neighbourhood for the rich folk.

The little money he earned was enough to keep them going. For just a fleeting moment her eyes lit up as she remembered him and all of the things he used to do for his family.

As she did, a small smile touched the corner of her gentle weatherbeaten face. Night times, she said, were the hardest for her. And as she began sharing there was the slightest little quiver of her lips.

When she watched her two little ones sleeping under the light of the old kerosene lamp, it’s when her heart would start melting and sinking. There was no one to talk to, no radio or TV to give her a moment of respite and to help her forget life’s troubles and struggles.

No one to make her laugh or tell silly jokes like they used to do on the island. The deathly quiet was deafening and sometimes scary.

It was usually about the time when the deep longing for the things that might have been, would start coming back to haunt her.

It was during these moments of utter loneliness and deep anxiety when she would begin thinking thoughts she was ashamed about thinking.

She would try driving it out of her mind just like how Samu had shown her to do. “I can do all things through Jesus Christ who strengthens me,” he would remind her.

But her mind would still wonder, sometimes aimlessly bringing even more sadness. And she would feel all the emotions of fear and despair trying to muscle into her mind.

She felt so guilty about how she was feeling and the trashy thoughts she was thinking. But she had no one else to share her heartache and sorrow with.

In those moments she would start thinking what life might have been like if Samu was still alive. He was her rock and so positive about their future. The children seem to be really missing him lately.

He was such a good father, always caring for his family the best way he could. And he always went without knowing his wife and children were taken care of first. It was during these moments of darkness and dread when she was at her lowest that she would remember one of his most precious possessions.

She would reach for Samu’s dog-eared Bible. Bits of what looked like old faded cellotape seemed to be holding the book together.

Just. As she opened a page, there it was – Samu had a habit of marking verses with an old yellow highlighter. She smiled as she remembered his quirky habit. It was his way of remembering scripture.

But some of the markings had now begun smudging and the words were starting to fade. The rain coming in through the cracks didn’t help. Unfortunately it had been doing all sorts of damage to everything. One stormy night it was so bad they were drenched to the bone.

She tried covering her children with her body to keep them warm. And as the rain pelted down and they shivered through the cold night, all she could do was hope and pray.

“Please God, look after my children. Don’t let anything bad happen to them.” When morning came she had to bring all their clothing and bedding out to dry.

So she placed them on the little trees beside their makeshift hut to dry in the sun. Even though she tried keeping the shack as clean as she could with the home-made sasa broom, it always felt damp inside. But there was little she could do.

And when the weather got really nasty it was hard keeping things dry and the food edible. Mould would start getting into the food. So most of the small quantity of food they had would begin to go off.

There was little else she could do but make moli tea for her children. Because there was nothing else left to eat.

As I listened to her story something inside of me began to break into a thousand little pieces. I wanted to reach out and put my arms around her and just hug her and cry like a baby.

But I had to choke back the tears because I knew it was not the right thing to do. I needed to hold myself in check and not become a blubbering mess.

There were protocols and cultural sensitivities to remember. While Mereseini’s story may be fictional, it’s certainly true of so many families who’re struggling to make a living every single day.

Because there are so many people just like her in this story who dread living the life they’re living because of circumstances totally out of their control.

This is my tribute to them. But it’s also my plea to you.

My goal is not to make you feel guilty because of what you and your family have. I applaud you for what you have and what you have achieved. My goal is to help all of us remember where we’ve come from and to, maybe, just maybe, remember those that need our help.

There are names of people and charities below this article including the name and number for Allen Lockington that you can donate to. God bless you for your kind-hearted gesture to give another family a chance at life.