Real in deep trouble but will keep the faith, says Zidane 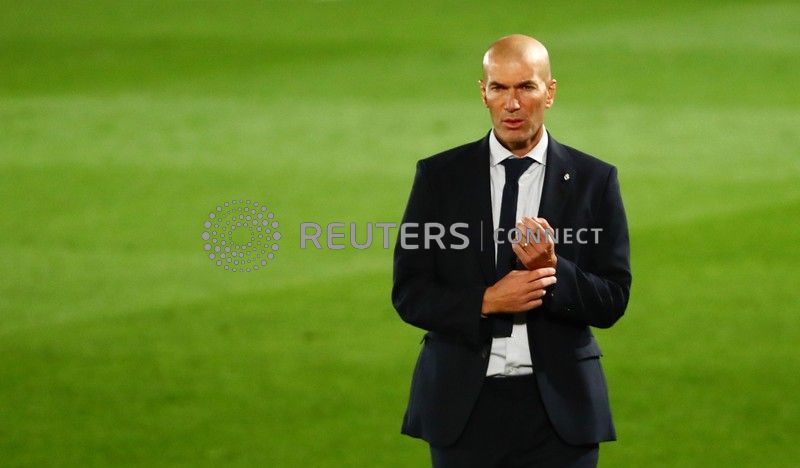 KYIV (Reuters) – Real Madrid coach Zinedine Zidane vowed to keep fighting on after his side were left in danger of a shock early Champions League exit after Tuesday’s 2-0 defeat at Shakhtar Donetsk.

Madrid have failed to win their last three La Liga matches and head into their final Champions League game third in Group B after goals from Dentinho and Manor Solomon condemned them to a second defeat to the Ukrainians after losing 3-2 in October.

Madrid host group leaders Borussia Moenchengladbach next Wednesday, while Shakhtar, who are second due to a superior head-to-head record over Real, visit bottom side Inter Milan.

“I feel strong and as always I’m going to give everything and so will the players,” Zidane told a news conference.

“We just have to keep our chins up and focus on the next game. There’s nothing else we can do.”

The Frenchman resigned as Madrid coach in May 2018 shortly after winning a third consecutive Champions League in Kyiv but insisted there was no chance of him doing the same now.

“We played very well in the first half but the ball didn’t want to go in the net. We had lots of chances, we hit the post, and after that things got more difficult for us.

“We’re on a bad run of results, that’s a reality, but we have to keep on going. We have one more game (in the group) and we have to win it.”

Real midfielder Luka Modric said the players were feeling low after the defeat but backed his team, who have qualified from the group stage 23 years in a row, to get the job done.

“It’s difficult to explain what is happening to us right now, we are in a very difficult situation, but we still have one game left and we’re going to do everything to win it,” he said.

“Real Madrid have always shown who we are when we need to win but we need to do our talking on the pitch now.”