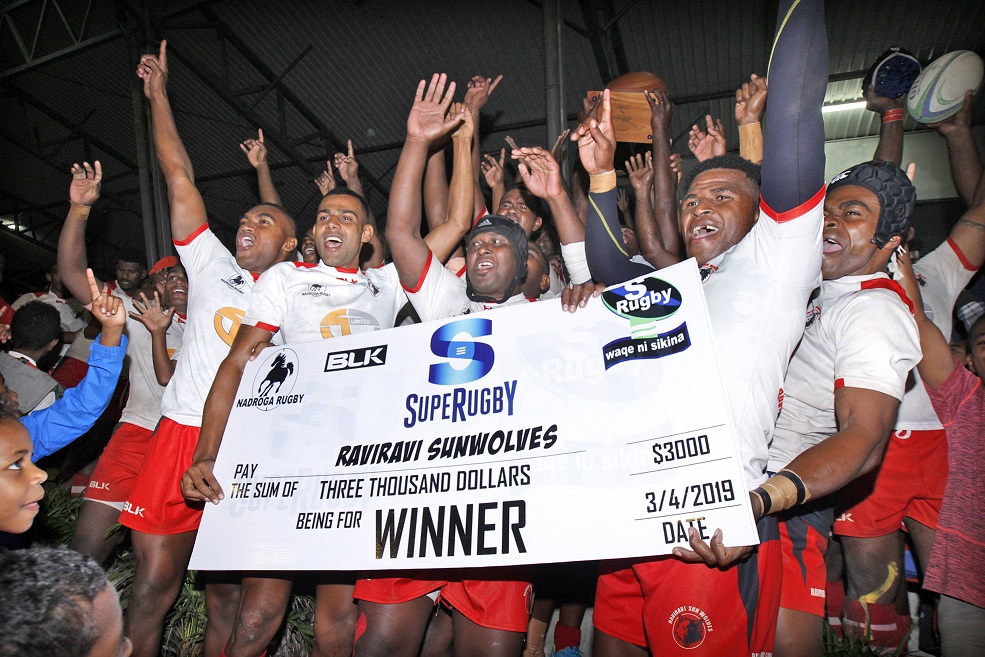 THE Raviravi Sunwolves rugby team is the champion of the 2019 Nadroga Super Rugby franchise.

The Sunwolves defeated Davujukia Reds 31-26 in an epic and nail-biting final at Lawaqa Park on Friday.

Both teams were locked 12-12 in the half-time break and were levelled 26-26 in the full time but it was the difference of determination, discipline and commitment that made the difference.

Sunwolves proved to be the better team at the end scoring their winning try in the dying seconds of extra time.

Raviravi Sunwolves Rugby Club is the smallest district formed team in the province of Nadroga with three villages only.

They proved to be the toughest when it came to rugby.

Club president Isaia Naluva said they had enjoyed the championship since the first round and they accomplished their mission by winning the final.

“This team is formed by three villages.

They are Yako, Momi and Nabila and since we started this franchise, we didn’t set our goal on winning a match, but we aimed high in reaching the final,” said Naluva.

He said six players from their team had been called to join the Nadroga training squad.

“An impact to the consistency of the players’ performance was the support from the vanua Tabanivono and Nakaria, families and friends because of them we played with confidence knowing we had the support.

“I acknowledge Tavarua Island Resort and Rustic Pathways for sponsoring the team financially and also with everything that helped us reach this far.”

“Congratulations to the Sunwolves for the well-played final and hats off to all the supporters who cheered for the boys and helping the boys reach the final and I salute the players for the job done despite falling short from winning the title,” said Dikedike.

“If it’s not meant to be ours this year, something better is waiting for us next and all we have to do is regroup and wait for the next challenge.”

Meanwhile, the Kalevu Challenge Shield is next with the top eight teams in the province to play for the prestigious title in Nadroga rugby.