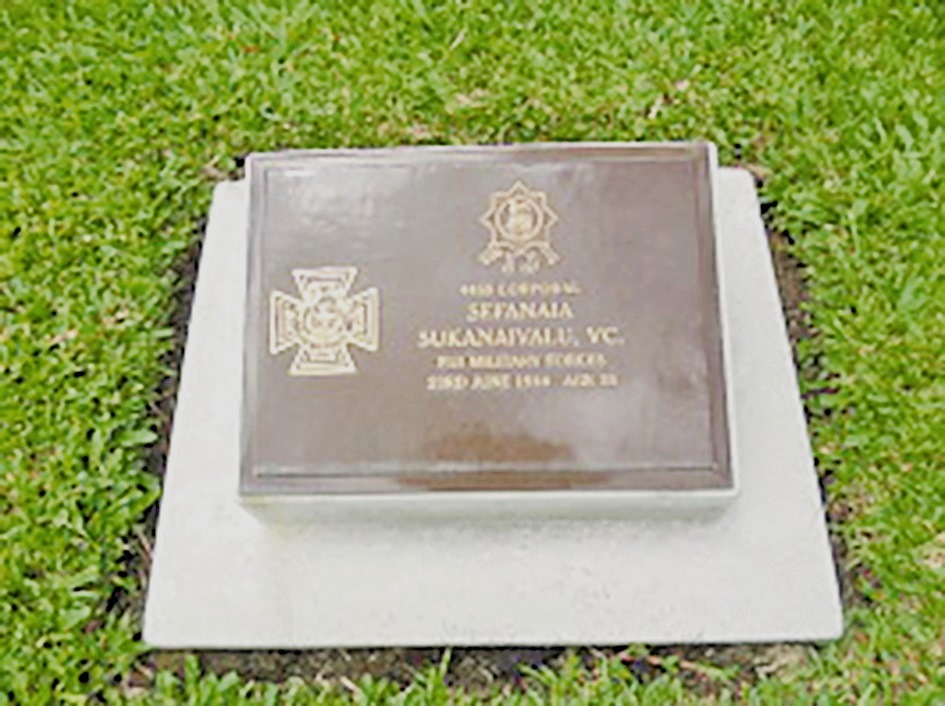 Part 3: This is the final article is on Ratu Sir Lala Sukuna’s visit to Yacata Island, Cakaudrove, in 1944 to tell villagers about the awarding of the Victoria Cross to Corporal Sefanaia Sukanaivalu. It is based on a radio program delivered by Sir Len Usher through the Fiji Broadcasting Commission in the 1950s.

He spoke of the Victoria Cross, of its history and its significance. He told them of the great number of men from all over the British Commonwealth and empire who had fought in wars for nearly a hundred years and of how only a few were given the award.

And then he went on to talk of the young man whom they had all known so well as Suka, Corporal Sefanaia Sukanaivalu.e spoke of the Victoria Cross, of its history and its significance. He told them of the great number of men from all over the British Commonwealth and empire who had fought in wars for nearly a hundred years and of how only a few were given the award.

He told them to think again of the battle scenes in the film “Easter Action” and of the battered trees in the jungle and of the type of fighting that was shown in the film. Then he told the story of how at Mawaraka (Solomons) in the face of strong Japanese fire Suka had crawled ahead in the similar jungle and had rescued one of his platoon who had been wounded. Then he had gone back to get another. This man was dead when Suka reached him, and Suka went on. Then he was hit in the groin and thigh by a burst of Japanese fire. He lay for several hours on the ground, alone, with occasional tracer bullets whistling just over him as a reminder that he was at the Japanese’ mercy if he ever moved.

His friends among the trees nearby were able to talk to him. They told him not to worry, that they would not let him fall into the hands of the Japanese and that when there was an opportunity they would come and get him.

Suka realised the position very clearly. He knew that if his companions stayed until darkness came there was a danger that they would be annihilated in the night. He knew they would not go while he was alive. He knew that if they tried to get him before dark, some, at least of those who made the attempt, would be killed. Suka saw movement among the trees and thought that the effort to rescue him had begun. Those who were watching saw him quite deliberately raise himself on his hands before the Japanese machine guns and fall again, riddled with bullets.

His platoon withdrew to the beach and got safely away.

Ratu Sukuna finished what he had to say by bidding them to be of good cheer. They had lost a young man who they had known and loved. They had gained a proud memory and inspiration. A son of Yacata had given his life so that his companions could save theirs.

As a result, he had been included in the goodly and select company of those after whose names were written the letters VC. He would be spoken of with pride by generations of his people. There is one memory I would like to recall. It is one which a good many of young will share. It is of the scene at Albert Park, Suva when the Victoria Cross won by Corporal Sukanaivalu was presented to his parents by the Governor of Fiji. It was quite an ordeal for Lote and Fani, Suka’s father and mother, to come to Suva, from the quiet obscurity of Yacata to become the central figure in a ceremony watched by thousands of people. Fani is a retiring person, gentle-faced and pleasant, but, very quiet. Lote is more poised and with the unshakable dignity characteristic of many elderly Fijian men.

It was a pleasant morning when the presentation took place. The Fiji Military Forces paraded in strength, the lines stretching almost the whole length of Albert Park. Company by company, the men were inspected by the Governor. Then Lote and Fani came up the steps and sat quietly on the platform in front of him. The citation was read in English and then by Ratu Sukuna in Fijian. Then the Governor stepped forward and bent down, with the Victoria Cross in his hand. Lote clapped his hands softly, as is the custom of a Fijian when receiving a gift, and then he cupped his hands and into them the Governor placed the token of his son’s valour.

Then the Governor and the representative of the King stepped back, looked for a long moment at Lote and Fani and then with his eyes still upon them, saluted them. And that was all. But there were few people that morning who were not moved by what they saw. The Governor’s salute seemed to have in it a tribute from everybody there, and from all over Fiji, and from the whole Commonwealth to that humble couple sitting in front of him.

Through them, it went to their son, who died for his companions, and in the manner of his dying had won the Victoria Cross and had gained for his name a permanent place in the memory of his people.

Fiji’s crushing season is off to a good start and is likely to break all records for the sugar industry in Fiji. For the past week, steam trials have been successfully carried out at the mills at Lautoka, Rarawai, Labasa and Penang. The four mills started crushing yesterday, South Pacific Sugar Mills Ltd has announced.

Rats are a major problem in the coconut industry in Fiji, according to two experienced planters. Mr W.G.MacKay, who was for many years on Nacaugai Estate, Taveuni, says they are the greatest single cause of loss in the industry.

Salary increases estimated to cost between 350,000 and 375, 000 pounds a year are proposed in the report of the 1964 Civil Service Salaries Commission published today.

The time is yet ripe for the introduction of television into the Colony. This was claimed yesterday in an official statement. This follows an Australian firm’s application to establish and operate TV services in Fiji.

When a Bill to amend the Rotuma Ordinance and allow Rotuman women over the age of 25 years to vote at elections of district representatives came before the Legislative Council, two Fijian members voiced their criticism of the measure.

Twenty-eight temporary nurses on the staff of the Medical Department have been a month’s notice. The nurses, all married, are being replaced by graduates from the Fiji School of Nursing.

Nineteen widows and 42 children will be cared for by the Kadavulevu Dependant’s Fund. There are also four dependent mothers and one dependent father.

Wide changes, bringing increased protection and compensation to injured workers, will be made in the Workmen’s Compensation Ordinance if a Bill to provide a new Ordinance is approved at the next meeting of the Legislative Council.

Mr A.J.Jeddere-Fisher, Senior Magistrate, at Lautoka yesterday sentenced a man to three years’ imprisonment, on charges of having caused grievous bodily harm to his wife and to his mother-in-law.

The Governor-General of New Zealand, Sir Bernard Fergusson inspected an RNZAF guard of honour at the hangar at Laucala Bay after his arrival by Sunderland from Apia. He is at the end of his tour of 17 different islands in the Pacific.

The Methodist Church in Fiji will hold its inaugural conference from July 5-July 12. Many official guests from Australia, New Zealand and other Pacific territories will attend.

The Secretary of State for the Colonies, Mr Duncan Sandys has approved an application by the Director of Public Works, Mr John Common, to retire, says a PRO release. Mr Common will leave Fiji on September 12 to return to Britain.

Rainfall at Koro-O has a bearing on the state of some of the rivers in Viti Levu, says an official statement.

The Acting Senior Magistrate, Mr Moti Tikaram, warned two employers, who appeared before him at Suva Magistrate’s Court yesterday on charges of failing to pay wages to employees, that he could have sent them to gaol.

Children were hustled to safety early yesterday morning as their school dormitory caught fire and a strong wind blew flames and sparks toward two other buildings in the school compound, which themselves caught fire and were completely destroyed.

Doctors were wizards and magicians but without the help of nurses their work and magic would, in many cases, be unsuccessful, Lady Jakeway said yesterday.

Both sides gave practical recognition of the value of the collective bargaining system, Mr Justice Marsack, independent chairman of the sugar industry said after amendments to the master agreement in the sugar industry were signed.

Shop breakers outwitted a police constable and his informant and locked them up in a room in one of Suva’s big stores about 7.30pm on Thursday night and made good their escape through a window in an adjoining room.

The Financial Secretary, Mr H.P.Ritchie and the Development Commissioner, Mr W.B. Rogers, have been in Australia for over a week making contacts with a view to attracting industries to Fiji and opening more channels for exports to Australia.

A free-for-all brawl ended a rugby match at Churchill Park, Lautoka, on Saturday afternoon. Several players received injuries, though none were serious.

Building activity in Suva for the first four months of the year is running at a high level, according to the monthly report of the Building Surveyor, Mr S.J.Taylor.

A new Suva power station with generators will initially cost around 300,000 pounds and will be worth ‘millions’ when it is finished, the Mayor of Suva Cr C.A.Stinson said at a meeting of the Suva City Council on Tuesday.

A committee of the Native Land Trust Board can now see the lines on which it will finish its work in relation to land claims by Fijian owners in the Ba area.

The final official chapter in the official probe of the foundering of the auxiliary schooner, Kadavulevu, with the loss of nearly 90 lives late on Easter Sunday between Nairai and Suva was recorded yesterday morning.