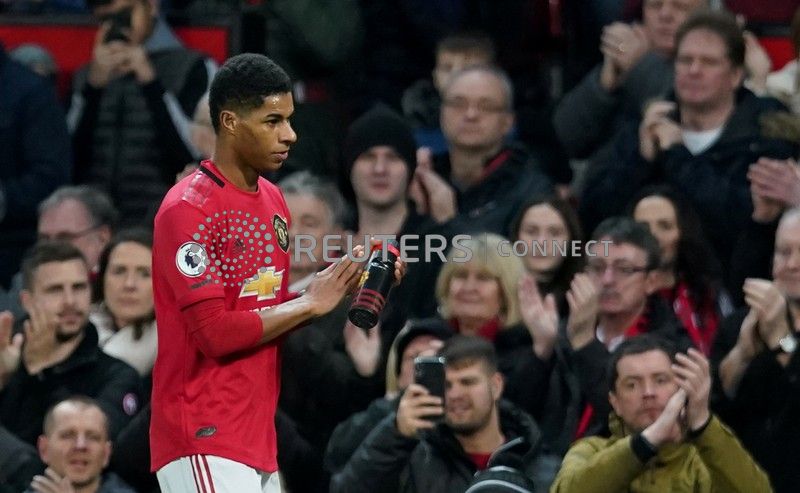 LONDON (Reuters) – Manchester United striker Marcus Rashford said “people are hurting and people need answers” after the death of George Floyd, a U.S. black man who died in Minneapolis after a white policeman knelt on his neck.

Floyd’s death on May 25 has sparked unrest and the imposition of curfews in dozens of cities across the United States, while in London on Sunday a demonstration was held in support of the #BlackLivesMatter movement.

“I know you guys haven’t heard from me in a few days. I’ve been trying to process what is going on in the world,” Rashford posted on his Instagram account.

“At a time I’ve been asking people to come together, work together and be united, we appear to me more divided than ever. People are hurting and people need answers.

On Sunday, Rashford’s England teammate Jadon Sancho took off his shirt when celebrating scoring a goal for Germany’s Borussia Dortmund, revealing a T-shirt with the slogan “Justice for George Floyd” written on the front.

Sancho added on Twitter: “A bittersweet moment personally as there are more important things going on in the world today that we must address and help make a change. We have to come together as one and fight for justice. We are stronger together.”

Premier League leaders Liverpool’s squad was pictured kneeling during training on Monday, with a caption “Unity is strength. #BlackLivesMatter”.

Top British sprinter Dina Asher-Smith added her voice to the protests: “Racism, police brutality…, all of this is something we all have to be vocal about. Irrespective of our race or nationality.”

There have been several nights of unrest over race and policing in many U.S. cities as a series of curfews failed to quell confrontations between some protesters and police.

Minneapolis police officer Derek Chauvin was charged last Friday with third-degree murder in the death of the 46-year-old Floyd.