Rarity of a jeweller 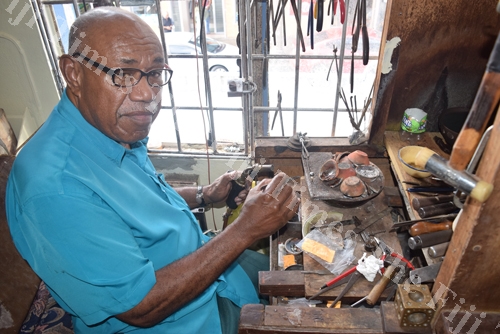 ROPATE Cabealawa sits in his small work area overlooking busy Marks St in Suva. He is surrounded by pieces of metal, various machines and implements.

The 66-year-old jeweller is sought by many to repair pendants, rings, necklaces and earrings to inscribing wedding bands, he does the whole works.

In fact, he has been carrying out this work for “a long time” and learned from some of the best in the business.

“I learnt it while working alongside a group of Gujarat jewellers from Bombay, India who used to operate their business here in Suva,” he said.

“I was in my early 20s when I started doing this work. It wasn’t a well paid job but I was determined to learn everything from those jewellers,” he said with a chuckle.

Mr Cabealawa was so good with his work that his employers recommended him to another jeweller who was willing to take him on “I started to learn the various skills involved in this trade and soon other local jewellers would come to see us complete some of the work they couldn’t do.

“I had a good relationship with the jewellers from Bombay. When they made the decision to move overseas to expand they helped me set my own business. Since then I’ve never looked back.”

Mr Cabealawa is just an example of Fijians of his generation who know the value of hard work.

“I am the only iTaukei of Solomon Island descent who is doing this work. There is not much competition because most of the jewellers or customers end up here to finish their work. There are less skilled people in this work too because it’s hard. You have to have the stamina and the focus. “There are a few jewellers operating in Suva, four of which work for jewellery shops while two of us operate our own shops.”

Mr Cabealawa says he doesn’t want the skill to die out and has taken on board his 15-year-old daughter to learn the skill.

“She didn’t do well at school so I want her to learn this trade early and get to be good at it like me,” he said with a smile.