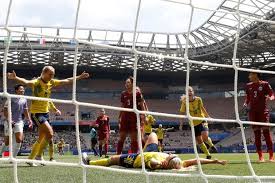 NICE, France (Reuters) – Sweden produced a breathtaking display of attacking soccer to thrash Thailand 5-1 in Nice on Sunday and book their place in the last 16 of the women’s World Cup.

Thailand, coming off a record 13-0 loss to defending champions United States in their Group F opener, conceded twice in the opening 20 minutes as they struggled to win aerial battles against a much taller Swedish team.

Center back Linda Sembrant broke the deadlock for Sweden with a thumping header off an Elin Rubensson free kick, before midfielder Kosovare Asllani pounced on a rebound to double their lead.

Fridolina Rolfo hammered in a third from outside the box as Sweden finished with three goals in the first half of a World Cup match for the first time since a third-place playoff win over Germany in 1991.

Forward Lina Hurtig fired another Swedish header to make it 4-0 in the second half but it did not slow down Thailand, who were courageous on the ball and created a couple of chances through forward Rattikan Thongsombut.

Thailand were eventually rewarded with their first goal of the tournament when captain Kanjana Sung-ngoen broke clear to fire past goalkeeper Hedvig Lindahl in the closing stages.

“This goal meant a lot to us,” Thai coach Nuengrutai Srathongvian said.

“It’s a difficult goal and playing a great team like Sweden, it meant so much. It meant that all of our preparation paid off.

“This one goal made us laugh, made us smile and makes us happy. Our defeat in the last game was massive — yes, we were disappointed. But we still need to improve and get close to the other super teams.”

There was still time for Sweden to reply after Rubensson fired home a penalty, which was awarded by the video assistant referee following Natthakarn Chinwong’s handball.

Thailand, who will meet Chile in their final Group F match, have now conceded 18 goals in two games at this World Cup, which equals the record for a single tournament set by Argentina in 2007.

It was a much improved display from Sweden, who peppered the Thailand goal with 34 attempts, after they labored to a 2-0 victory over Chile in their opening match.

“It’s good that we had five different scorers,” Asllani said. “I felt that we found a number of avenues to break through and overall it was a good match.

“I think the further we go in the tournament, the tougher the teams (will be), so it was positive we could create a lot in the last third.”