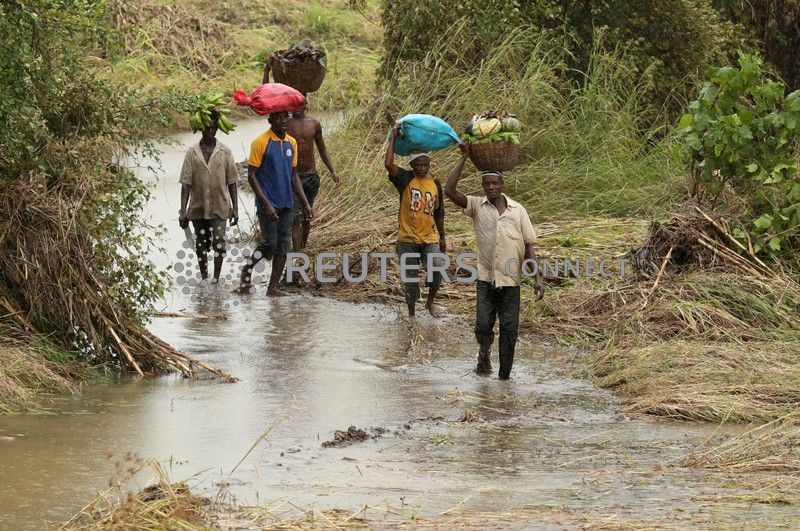 Villagers carry goods through the fields flooded in the aftermath of Cyclone Kenneth, along the Mieze river near Pemba, Mozambique, April 30, 2019. REUTERS/Mike Hutchings

Cyclone Kenneth slammed into Mozambique’s Cabo Delgado province on Thursday with winds of up to 280 km per hour (173 mph), flattening villages, destroying crops and turning streets of the Indian Ocean port city of Pemba into raging rivers.

It followed last month’s Cyclone Idai, which struck further south, destroying the port of Beira and killing more than 1,000 people across Mozambique, Zimbabwe and Malawi.

Tuesday’s heavy rains swelled already bursting rivers and interrupted aid operations for a third day. Only a few flights were able to take off in the morning, meaning some of the worst-hit communities remain cut off with limited supplies.

The United Nations’ World Food Programme (WFP) said it was particularly worried about people on Ibo island, who had little food and were in the open after most homes were destroyed.

“For us it’s a frustrating day … There is not much we can do to reach these islands now,” said WFP spokeswoman Deborah Nguyen.

More flooding may be coming, with thousands of people living in areas at risk. In Pemba, 35,000 houses were completely or partially destroyed, authorities said, while outside the city crops were destroyed and villagers waded through flooded fields with wood, salvaged maize and other products on their heads.

The confirmed death toll from Cyclone Kenneth rose on Tuesday from 38 to 41, a spokesperson for the Council of Ministers told a news conference in the capital Maputo.

It is likely to rise as officials reach all affected areas.

Pemba’s mayor Florete Matarua told local TV channel STV that a landslide at a rubbish dump on Sunday had killed at least five people, possibly in addition to the official toll.

The people were all members of the same family and several other houses had also been buried, STV reported.

Kenneth killed four people in the Indian Ocean island nation of Comoros to the north before barrelling into Mozambique, the first time on record two powerful storms had hit the southern African country in such a short space of time.

Aid agencies and others have blamed climate change.

Preliminary government assessments suggest 31,000 hectares of crops have been lost in an area already vulnerable to food shortages. Fisheries and other key sources of sustenance like coconut trees were also damaged.