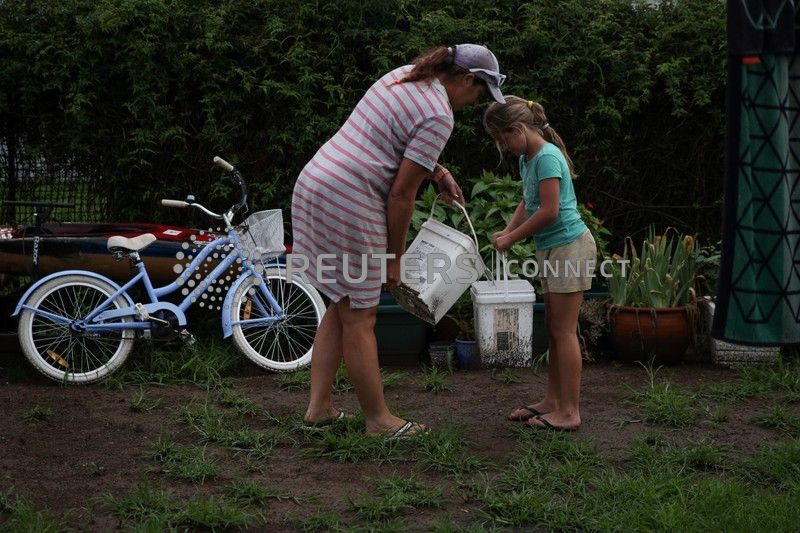 MURRURUNDI, Australia (Reuters) – For all the relief felt in other parts of eastern Australia as torrential rain in the past few weeks doused wildfires and filled reservoirs, the tiny township of Murrurundi, one of the driest places in the country, just can’t seem to catch a break.

The struggling farming community of less than 900 people saw the rain falling in surrounding hills, and watched as the clouds passed by, but the three weeks of drizzle it has received was barely enough for families desperate to fill their water tanks.

“You can watch storms go straight around and you won’t even get wet here. It gets frustrating. It makes you want to run up into the hills and see if you can bring it back,” said resident Sally Roser, standing by the tank, buckets and containers she’d put in her backyard to catch what rain she could.

While the horrific wildfires that ravaged Australia in recent months ignited a national debate over climate change, the tinder for that argument was already provided by the three-year drought endured by rural communities like Murrurundi.

Back then, the Pages River ran dry, leaving little behind the dam that held the town’s water supply.

Located 300 kilometres (186 miles) north of Sydney, Murrurundi was one of the first places to implement the highest level-6 water restrictions during a drought that has become one of the most severe on record.

Those restrictions, implemented in July 2018 and designed to cut water use by 85%, will likely remain in place until a new pipeline starts pumping water into the town’s reservoir from a lake 40 kilometres (25 miles) away in the coming months.

The town has survived for more than a year on water brought in daily by road tankers. Working six days a week, driver Mathew Byrne trucks in more than 120,000 litres of drinking water a day from the nearby town of Scone.

“The river hasn’t run since 2017,” said Byrne, relaxing in one of Murrurundi’s three pubs shortly after finishing a delivery. “There’s no water going through the creek. It’s pretty sad.”

Wendy Jackson, a reverend at St Paul’s Anglican Church, said it had been a torrid period for the community.

“There have been awful tragic stories of people who have given up hope,” Jackson told Reuters in the small, sandstone church where a couple of dozen residents typically gather on Sundays.

“I did a funeral for a gentleman here a few months ago who just became so depressed and became physically ill and he just gave up. He had to sell all his cattle. His wife is now still struggling on their place to keep it going.”

Jackson said despair overwhelmed another farmer whose herd was so underfed that he couldn’t find a buyer.

“The farmer shot all the cattle, then shot himself.”

Australia’s Bureau of Meteorology (BOM) says the drought is being driven, in part, by warmer sea-surface temperatures impacting rainfall patterns. Air temperatures have also warmed over the past century, increasing the ferocity of droughts and fires.

Fuelled by drought-affected bushland, fires have struck like never before, claiming 33 lives and fanning a fierce political debate over climate change in coal-rich Australia.

Under pressure from environmental groups, scientists and the Australian public to address climate change, the conservative government recently acknowledged for the first time that the country must adapt.

Government forecaster ABARES estimates that the long-term higher average temperatures have reduced average farm profits by more than one-fifth, raising the prospect of more people being driven off the land.

Washing dishes at the Royal Hotel, a pub in Murrurundi, Gordon Simpson described how his old line of work dried up.

“First time I’ve had to work in the kitchen – I’m usually mustering cattle or fencing or something like that,” Simpson said. “There’s no work because of the drought.”

He said the light rain might just be enough to get him out of the kitchen, if farmers needed someone to spray the weeds that were starting to grow.