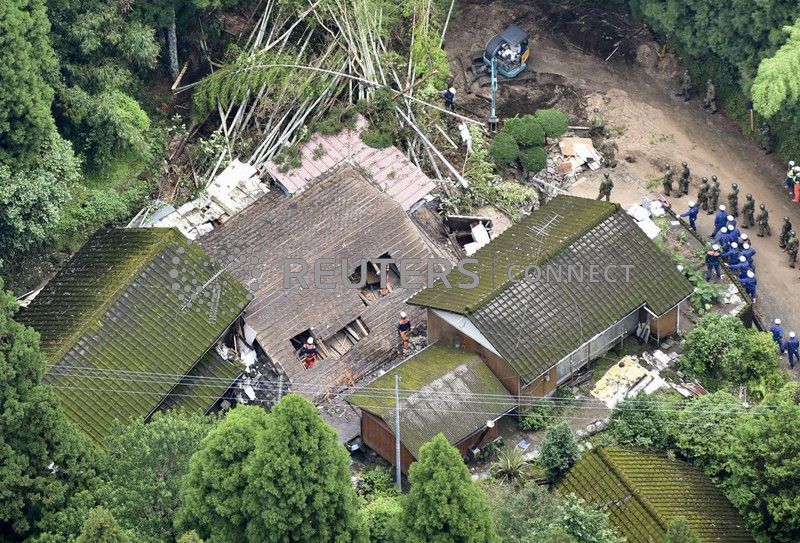 An aerial view shows rescue workers searching for a missing resident at a collapsed house due to a landslide caused by heavy rain in Soo, Kagoshima prefecture, southwestern Japan, July 4, 2019, in this photo taken by Kyodo. Mandatory credit Kyodo/via REUTERS

TOKYO (Reuters) – Heavy rains eased in southern Japan by Thursday, but authorities maintained evacuation orders for more than a million people, warning against a risk of more landslides, which have killed two people.

Since Friday, some areas of the southernmost main island of Kyushu have received as much as 1,000 mm (39.4 inches) of rain, or more than double the usual volume for all of July, public broadcaster NHK said.

As the rains shifted towards central and eastern Japan, NHK warned Kyushu residents not to rush home as the landslide danger persists. The Yomiuri daily newspaper said 11,353 people had flocked to evacuation centres.

The resident of a home razed in a landslide on Thursday morning, a woman in her 80s, was killed, Kyodo news agency said.

A woman in her 70s in the prefecture of Kagoshima in southern Kyushu died this week in another landslide.

The government was criticised for its slow response last July when heavy rains in Kyushu triggered landslides and floods, killing more than 200 people in Japan’s worst weather disaster in 36 years.