Rain sweeps in on final Open practice day at Portrush 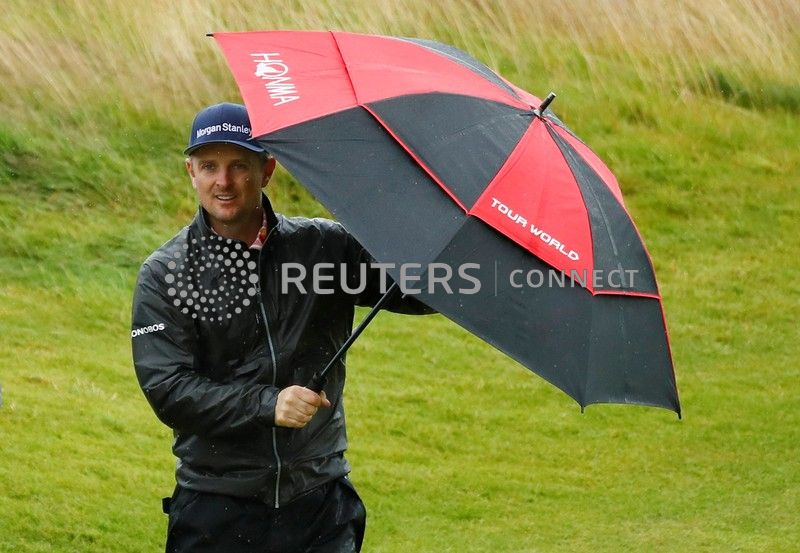 The final day of practice before the British Open Championship at Royal Portrush was hit by steady rain on Wednesday, and forecasts are for showers on the first two days of competition.

Strong sea breezes combined with the showers, ensuring the players got a taste of what they may come up against when play gets underway on Thursday.

The conditions did not keep a huge crowd from turning out to watch the world’s top golfers get in their final preparations before the 148th British Open begins. Local favourite Darren Clarke is due to hit the first tee shot at 0635 local time.

The Met Office weather forecast for the opening round expects “passing showers throughout the day” with short bursts of heavy rain. Winds of 20 to 22 miles per hour are forecast in late morning.

Spaniard Jon Rahm, who finished tied third at the U.S. Open last month, said the rain would make for a “tough grind” for the players.

“You have to battle it. It’s very difficult. When it starts raining, you start getting water on the club face and balls start being a little bit unpredictable,” he said.

Rahm said sporadic showers, such as are forecast, require a different response.

“If you can just somehow keep the momentum going and battle out those tough times you might be able to keep a round going. If you completely derail, which can happen really easily, you lose your swing, you lose your touch, it’s hard to get it back,” he said.

Friday sees a continued chance of rain, although the forecast is for “mainly dry” weather, particularly at the start of the day.

The conditions are forecast to brighten at the weekend with temperatures rising, although it is expected to remain changeable.