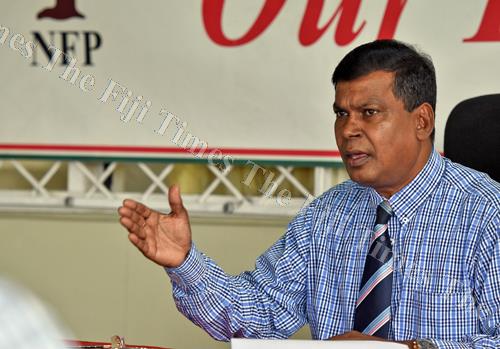 In a statement issued yesterday Party leader Professor Biman Prasad said people must talk to each other instead of talking about each other because doing the latter can cause irreparable harm to racial harmony.

“In the period following the general election, we are seeing, including on social media, an upswing in ethnic tension, both in insulting comments on platforms such as Facebook and Twitter and in reports of incidents which appear to be ethnically-based,” Prof Prasad said.

“Some people are disappointed about the election result. Some people are triumphant about it. But these different emotions should not be a reason to fracture our unity as a nation.

“We do not want people to be prevented from what they want to say — that has been the problem for too long.”

He said members of the public should not make racially-based or insulting comments arising from the election result.

“We ask everyone, on all sides of the political spectrum, to reflect carefully on the things that are most important to us in Fiji.

“We should all say what we want to say – but surely we can find a way to talk about national issues in a calm and measured way, without deliberately hurting the feelings of others.”