Rabuka: Grip will soon be broken 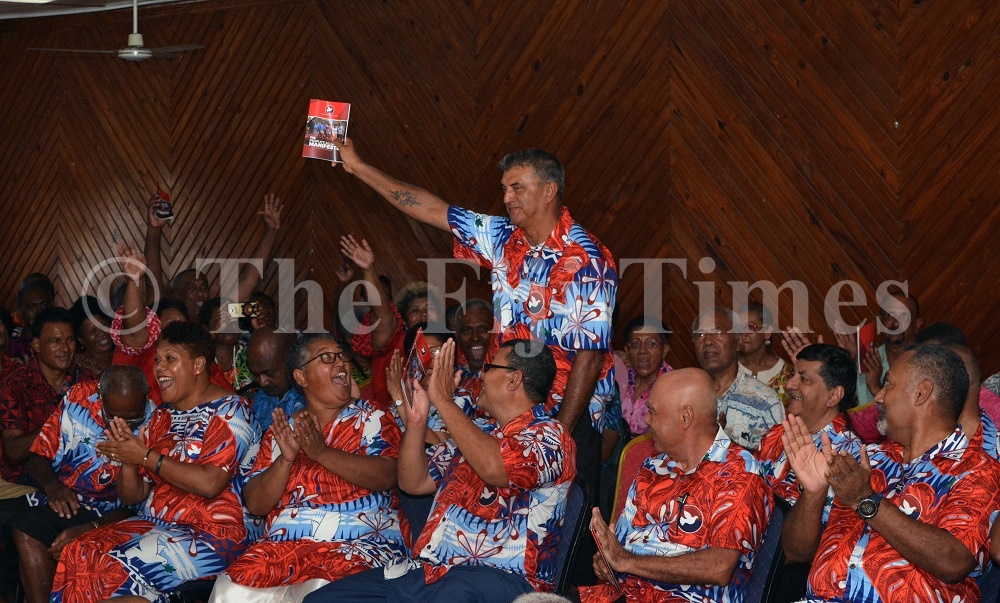 Parmesh Chand being introduced to the crowd during The People’s Alliance Manifesto Launch at Namoli village in Lautoka. Picture: BALJEET SINGH

Enough is enough, sa rauta mada, bas karo, said The People’s Alliance party leader Sitiveni Rabuka in Lautoka yesterday as he launched the party manifesto. Mr Rabuka said it was time to “stand up and make a declaration through the ballot box”.

“The cry of the people resounds throughout our islands telling us that the dictatorship of two men must end. It is a cry for freedom and a new season of happiness and unity,” he said.

“All who joined with me in the party’s formation were driven by the desire to rescue Fiji from the clutches of Voreqe Bainimarama and Aiyaz Sayed-Khaiyum and their mysterious FijiFirst party.

“I say mysterious because little is known about how it is organised and operates. We suspect it is there simply to help them maintain their grip on Fiji.

“That grip will soon be broken.

“After experiencing the 16-year ordeal of their mismanagement and authoritarianism, you will all agree that we are now worse off than at any other point in our modern history. This is the legacy left to us by FijiFirst.

“I reiterate that Mr Bainimarama has surrendered most of his power to Sayed-Khaiyum. He has, therefore, lost control of the government he was elected to lead.

“This strange, disturbing arrangement has been disastrous for Fiji. It has led to crisis on top of crisis affecting the economy, social life, democracy and the rule of law.

“This long list of woes, this collective nightmare, explains why The People’s Alliance is pushing hard for a victory in the election on December 14.

“If the people give us the win we seek, we will form a powerful partnership with them so that together we can rescue Fiji.”