Rabat organizers made it impossible for Semenya to race, says legal team 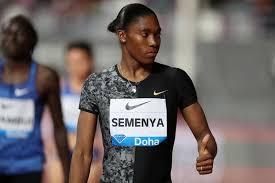 (Reuters) – The Moroccan Athletics Federation made it “impossible” for Caster Semenya to compete at the Rabat Diamond League meeting on Sunday because of the lateness of a re-invitation, the South African athlete’s legal team said on Saturday.

Semenya, the double Olympic 800 meters champion, never declined an invitation to run in the Rabat 800m, her legal team said, and was told only on Friday that she was being invited to race having had an initial invitation revoked.

“On June 14, the Federation changed course once again and told Caster’s agent that Caster was re-invited to run on June 16,” her legal team said in a statement.

“At that time, the only flights to Rabat would have involved 20 hours of travel, which meant that competing in the event was not rationally possible for Caster.

“Caster rejects any suggestion that she declined a proper invitation to run in Rabat. To the contrary, her inability to run in Rabat is solely due to the Moroccan Federation’s sudden and unjustified withdrawal of its initial invitation that Caster had gladly accepted.”

Semenya became the center of heated international debate after a controversial ruling by the Court of Arbitration for Sport (CAS) last month.

CAS said that the sport’s ruling body, the IAAF, should make rules for XY chromosome athletes with differences in sexual development (DSDs), such as Semenya, competing in events ranging from 400 meters to a mile.

The CAS verdict was highly controversial, with many high-profile current and former athletes lining up on both sides of the debate.

The Swiss Federal Tribunal later ordered the IAAF to immediately suspend implementation of the regulations on Semenya, allowing her to compete without restriction while she appealed against the decision.

Semenya said on Thursday she had been denied entry into the event in Rabat in apparent violation of the Swiss tribunal’s decision.

Saturday’s statement said Semenya had been booked to fly to Rabat on Wednesday, having been invited to compete on June 6, but that the Royal Moroccan Athletics Federation athlete liaison, Alain Blondel, had told her agent on June 11 that its president “did not want Caster to run”.

The IAAF has said it has no say in who competes in Diamond League events such as the one in Rabat.