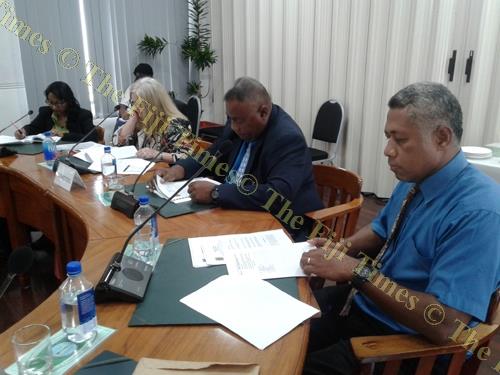 The Ministry of Fisheries and Forests team, from left; Sanjana Lal, Bernadette Welch, Sanaila Naqali and Taniela Naulu during their submission to PAC. Picture: Manasa Kalouniviti

One of the qualifying issues in the audit of the Ministry of Fisheries and Forests 2016 accounts raised by the Auditor-General (OAG) was an unreconciled variance of $224,312 between the fishing licence fees of $405,640 and the FMIS general ledger balance of $629,952.

The ministry’s principal accounts officer Taniela Naulu in the ministry’s submission to the Public Accounts Committee (PAC) on Thursday said the checking mechanism was an issue they would be strengthening.

“We are also faced by the lateness of records that come from the divisions to headquarters for recording in the FMIS,” he said.

Mr Naulu said: “Actually, the FMIS general ledger is what we rely on but some of the records that were not forthcoming from the various divisions were not inputted into the system.”

Mr Radrodro then asked the principal accounts officer where did the information that go into the FMIS general ledger come from to which he answered that it came from the general ledgers maintained by the divisions.

The ministry was making submissions to PAC in response to the audit findings of the OAG in the audit of its 2016 accounts.

The ministry in 2016 had included both the departments of forests and fisheries under one ministry.