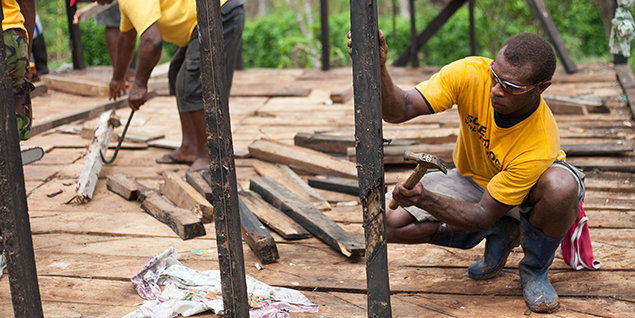 A quantity surveyor reveals the $7000 given by Government in its Help for Homes initiatives as part of the rehabilitation works for devastation caused by Severe Tropical Cyclone Winston, is enough to only build the foundation of a house that can withstand a Category 3 cyclone. Picture: FREEDOM MAGAZINE

A QUANTITY surveyor reveals the $7000 given by Government in its Help for Homes initiatives as part of the rehabilitation works for devastation caused by Severe Tropical Cyclone Winston, is enough to only build the foundation of a house that can withstand a Category 3 cyclone.

Joape Tiko, who has been a quantity surveyor for more than four decades, has just returned from Koro Island after being hired to do consultancy works on schools under construction on the island, said just by visiting the villages he felt sorry for the islanders.

Two years after the Category 5 cyclone wreaked havoc across the Fiji group, with Koro being one of the heavily affected, Mr Tiko, who has worked for government and done freelancing work in New Zealand and Australia, said there was no way $7000 would be enough to build a proper house.

Mr Tiko said there were alternatives that could have been taken in order to build the best houses for those affected by the monster cyclone.

“If they give $7000 and they provide the material then we looking at something solid to build. I am not an architect nor am I an engineer, I am a quantity surveyor, if you want to build a house and the money you going to give cannot meet the project cost, I can give you the alternatives and will make sure to give you the best.

“The options we have, if we can have the soldiers come, we actually can save money through labour cost by sending in the military guys,” said Mr Tiko.

More than two years after STC Winston claimed the lives of 44 Fijians, Mr Tiko said he was worried, those who had rebuilt their houses may not be safe enough inside their own homes.

“I don’t know how those houses were built, but I believe these villagers will not be safe in their own houses, if they were not built properly. In most cases when building houses in the village we can get anybody, who may have the experience. We sometimes build houses quickly, just so that we can move in quickly. When there is a natural disaster then we find out it was not built well.

“Now after Winston, we have been reminded to build better and stronger houses.”