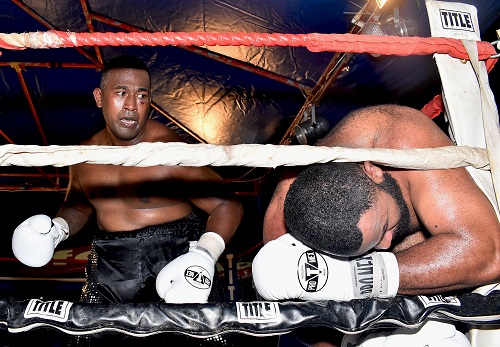 Known as ‘The Beast’ Singh overpowered Qica with his superior fitness dropping the southpaw twice in the fifth round to claim an unexpected technical knockout victory.

Qica weighed in at a whopping 130 kilograms for the bout while Singh tipped the scale at 101kg.

It was Singh who took charge from the opening bell with his quick jabs intimidating Qica.

By the third round Qica looked weary with Singh using his fast movement around the ring.

Qica landed a few heavy shots but it did not affect Singh.

In the fourth round, Qica’s hands were wobbly allowing Singh many clean shots to his face.

Fatigue finally got Qica in the fifth round as he was cornered on the ropes by Singh and dropped to his knees with his hands on the ropes.

Referee Faiyaz Khan gave Qica the mandatory count as he slowly got to his feet.

Qica tried to continue but was again forced by Singh in the same corner.

The big man dropped in similar fashion but this time he did not have enough strength in his legs with the referee waving the fight off in 2 minutes 13 seconds of the round.

After the fight, Qica admitted that fitness was his major drawback.

Qica said it wasn’t his night and he let his fans down.

“There were some ups and downs during my training and my fitness was a concern. Just calculate it, I think I was only about 40 per cent.

“I know that it was James’ night and not mine.

To all the supporters who turned up to cheer for me, I’m sorry for this result because I really let them down.

“I hope to get a rematch as soon as possible. James is a really good fighter and he was 100 per cent fit.”

Qica made his debut in 2009 at the Vodafone Arena in Suva defeating Fatu Tuimanono via a technical knockout.

He won the Fijian heavyweight title in 2010 beating former champion Mosese Kavika via a majority decision at Prince Park in Nadi.