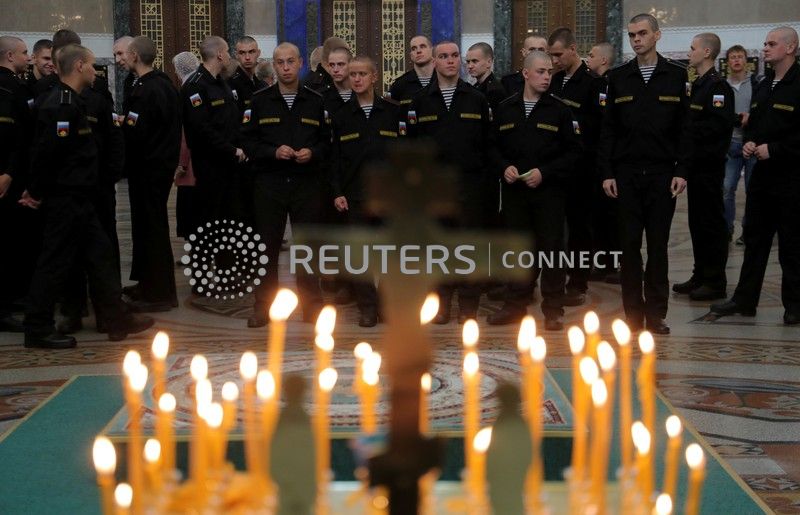 Russian servicemen attend a memorial service for sailors killed in a Russian submarine, which caught fire in the area of the Barents Sea, at the Naval Cathedral of Saint Nicholas in Kronstadt, Russia July 4, 2019. REUTERS/Anton Vaganov

MOSCOW (Reuters) – Russian President Vladimir Putin disclosed on Thursday for the first time that a secret military submarine hit by a fatal fire three days ago was nuclear-powered, prompting the defence minister to assure him its reactor had been safely contained.

Russian officials have faced accusations of trying to cover up the full details of the accident that killed 14 sailors as they were carrying out what the defence ministry called a survey of the sea floor near the Arctic.

Moscow’s slow release of information about the incident has drawn comparisons with the opaque way the Soviet Union handled the 1986 Chernobyl nuclear power station disaster, and another deadly submarine accident — the 2000 sinking of the nuclear-powered Kursk, which claimed 118 lives.

Russia, which says the details of the submarine involved in the latest accident are classified, said the fire took place on Monday, though it was only officially disclosed late on Tuesday.

Until Thursday there was also no official word on whether the vessel had a nuclear reactor, despite strong interest from neighbouring Norway.

Putin revealed that the submarine had been nuclear-powered by asking Defence Minister Sergei Shoigu during a Kremlin meeting about the reactor’s condition after the fire.

“The nuclear reactor on the vessel is completely isolated,” Shoigu told Putin, according to a Kremlin transcript. “All the necessary measures were taken by the crew to protect the reactor, which is in complete working order.”

The fire erupted in the submarine’s battery compartment, Shoigu added, and later spread.

Although the Kremlin publicised the meeting on Thursday morning, it was not immediately clear when the men had met.

“There has not been any formal communication from Russia to us about this,” Per Strand, a director at the Norwegian Radiation and Nuclear Safety Authority, told Reuters when asked if it had been informed that the submarine was nuclear-powered.

“We understand they brought the situation under control quickly, under difficult conditions, and there was, as such, no nuclear incident that they were obligated to tell us about.

“Still, we would have been happy to have been informed of such incidents,” he added.

Russian servicemen attended a memorial service on Thursday in the port city of Kronstadt near St Petersburg in honour of the 14 dead submariners.

Held in the hulking Russian Orthodox Naval Cathedral of St Nicholas, sailors cradled lit candles and looked on as priests read out prayers and a choir chanted in the background.

Shoigu, a close Putin ally, told the president that the submarine, which authorities said had been operating in the Barents Sea area, would be fully repaired.

“Right now, we are assessing how long it will take, how much work there is, and how we can carry it out,” he said.

Shoigu’s ministry has released photographs of the deceased sailors, hailing them as “real patriots of the Motherland”.

Separately, a photograph of a tribute to them circulated on social media which appeared to have been hung on the wall of a Russian military facility. Reuters could not immediately confirm its authenticity, but it said the men had served on board a deep-sea submersible known by the designation AS-31.

Russian media have previously reported, without official confirmation, that the vessel was designated as either AS-31 or AS-12 and is designed to carry out special operations at depths where regular submarines cannot operate.

The submarine is made up of a series of inter-connected spheres that allow it to resist water pressure at great depths. Western military experts have suggested it is capable of probing and possibly even severing undersea communications cables.

Putin ordered Shoigu to prepare posthumous state awards for the dead submariners. An official investigation into the accident, likely to be shrouded in secrecy, is already underway.