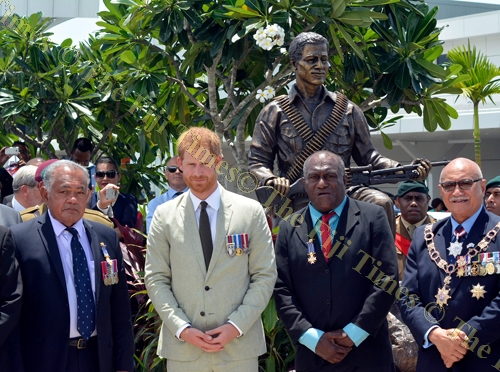 ISAIA Dere was “excited and happy” because he had been hearing about the unveiling of his father Sergeant Talaiasi Labalaba’s statue for the past two months.

Yesterday’s event at the Nadi International Airport was “very special to see this unveiled by the prince,” the 52-year-old said. He said the inclusion of the statue at Fiji’s gateway to the world would also inspire soldiers travelling to overseas missions.

“When these young men and women fly out, they’ll see the statue and think ‘oh, he’s done so well for his country and we can too’ and this is a very proud moment for us in Nawaka.”

Speaking at the event, President Jioji Konrote said Sgt Labalaba’s death on July 19, 1972 occurred while he was on a mission code named Operation Jaguar, which was part of the British effort to help protect the Sultan of Oman.

“Some 250 rebels stormed the town of Mirbat on their coastal urban sea and had the British forces pinned down inside a local fort which they were about to overrun,” he said.

“Now with no cover and very heavy fire, Sgt Labalaba sprinted across 800 metres to reach a 25 pounder field gun which normally requires three, four or six men to operate effectively.

“As his fellow troops watched in astonishment, he turned the huge weapon around and opened fire at point blank range on the rebels, decimating their ranks and successfully keeping them away from the main British and local forces’ defensive lines.

“He was shot dead by rebel forces as events transpired.”

Mr Konrote said Fiji honoured his family and his village, as well as the memory of all Fijians who had served in the armed forces over the decades in war and peacetime.