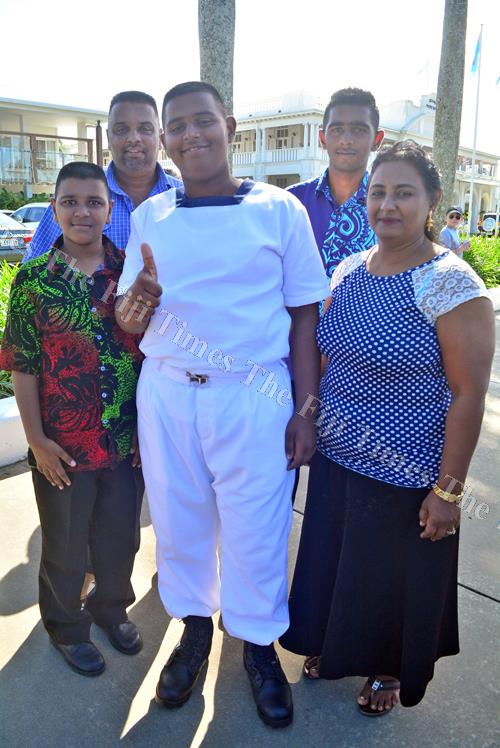 IT was a proud moment for Mohammed Yusuf after witnessing his son during the Dudley High School cadet passing-out parade.

Yusuf is probably the proudest father because not only was his son the first in the family to participate in a passing-out parade, but also that he is now part of history.

History in the sense because this was the first passing-out parade in the school’s 121 year history and Yusuf’s son, Mohammed Sohil Zuber, was part of the batch.

Yusuf, who has been a taxidriver for most his life, said his second youngest son was a dream catcher.

“It was a good experience for us and we are so happy to be here to witness the first-ever cadet passing-out parade for Dudley High School. “We are so happy for this and we are so proud of him because he has really worked hard during the cadet training. “Growing up, he had always wanted to be a businessman, having dreams of one day running his own business, but this passing-out parade changed his dreams and ambition. “Today, he says he wants to be enlisted in the Fiji Navy or the Fiji Military Forces, so whatever his decision, we will support him,” said Yusuf.

Zuber, 16, added cadet training was difficult but he believes it was something relevant and applicable for all schools and students.

“The cadet training was indeed difficult we had to stand under the sun for long periods of time, we had to march around the grounds three times a day, when we didn’t listen to the instructors we would get punished, we were told to do as they say. We have to work towards the goal and that was to showcase an excellent parade and we have done that today. “I have a seen a change in the students’ behaviour since the start of cadet training, students are becoming better and paying more attention in class and getting more disciplined.

“I would encourage other schools to take up cadet training, it’s a very worthwhile experience it is very difficult but it will help mould students to become better and help them in their individual lives. “I believe the cadet training will help instil discipline within the students and I believe this cadet training should continue in the years to come.

Chief guest and Commander of the Republic of Fiji Military Forces Rear Admiral Viliame Naupoto said the cadet training was about rediscovering purpose and instilling discipline.

“The training that you have just completed was not meant to turn you into navy sailors or soldiers even though you might want to take up that field as a career in the future.

“What the training does is this, first it was meant to help instil to you some very important virtues like discipline, perseverance, obedience and respect that are important for you now in school and at home and it will be important for you throughout your life.

“Thirdly, the training was meant to allow you to discover a little bit more of yourself, self-discovery was a vital phase of your life as you transition into adulthood during the training you would have found new abilities.

“Perhaps new talent, you have found out a little about your limits and perhaps some new skills and we designed the training so that it will bring out and enhance the leadership command and communication skills of those of you who are in some leadership positions in schools that is why most of you in your parade today are school prefects but what was important was that your applying all that you have learned during your cadet training into your daily life.