Protests flare in Bangladesh over killing of university student 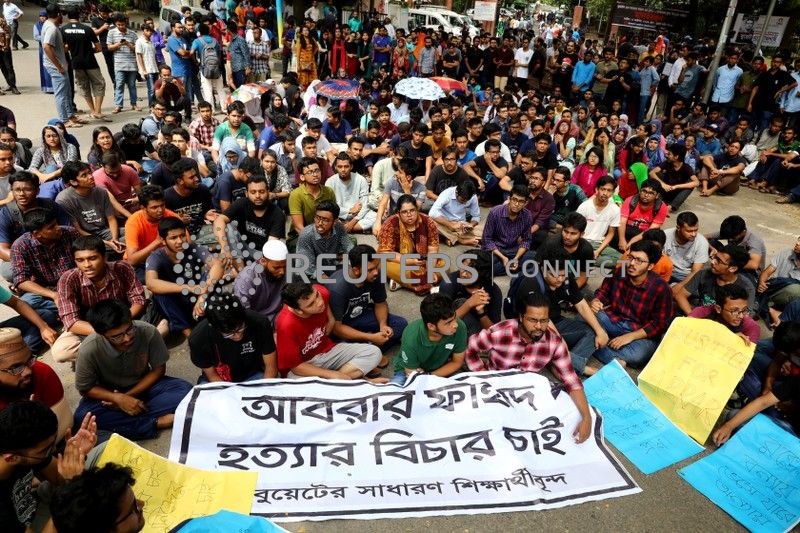 Students block a road to protest against the murder of Abrar Fahad, a student of Bangladesh University of Engineering and Technology (BUET) in Dhaka, Bangladesh, October 9, 2019. REUTERS/Mohammad Ponir Hossain

DHAKA (Reuters) – Hundreds of students protested across Bangladesh on Wednesday calling for political groups to be banned from campuses days after a student was killed, allegedly by activists from Prime Minister Sheikh Hasina’s ruling party.

The protests started in Dhaka after Sunday’s killing of 21-year-old Abrar Fahad at the dormitory of the Bangladesh University of Engineering and Technology (BUET), where he was a second-year student. He had written a Facebook post criticising a government water deal with India.

Responding to the protests, Hasina said the government would not interfere if any university decided to ban political groups. She said she had ordered her party’s student wing to expel anyone involved in the “extremely cruel” killing.

“I can feel the pain of the parents who lost their child,” Hasina told a news conference at her official residence.

Protests spread across the country on Wednesday, with many teachers joining students, who chanted slogans demanding justice.

Police said they had arrested 13 leaders of the Chhatra League – the student wing of Hasina’s Bangladesh Awami League – whose members have been accused of beating and killing Fahad by his fellow students and family.

“My son was innocent. He had his own opinions,” said Barkat Ullah, Fahad’s father. “They beat him for six hours and killed him.”

Fahad’s body was found on a stairway at the university dormitory in the early hours of Monday. An autopsy showed that he had been bludgeoned with blunt objects and had extensive bruises on his hands, legs and back.

In an Oct. 5 post on Facebook, Fahad had criticised a government move to share water with India, after Dhaka and New Delhi announced the signing of several deals, including allowing India to draw water from Bangladesh’s Feni river.

“Chhatra League did not give any instructions to beat any student,” said Lekhak Bhattacharya, the League’s acting general secretary. He demanded strong punishment to the killers, but said he did not support banning student political groups.

The United Nations on Wednesday condemned the killing and called in a statement for an independent investigation.

“Freedom of speech is a human right,” the U.N. said, adding “nobody should be harassed, tortured or killed for exercising it”.

The British High Commission in Bangladesh tweeted it was “shocked and saddened by events at BUET”.

The students are demanding that political groups be banned from campuses.

“We want a complete ban on party-based politics on the campus. We won’t tolerate it anymore after the killing of our fellow,” said Sanim Rahman, a student at BUET. “We’ll continue our protests until we get justice.”

Mahmood Uddin Chowdhury, a Dhaka University teacher taking part in the protests, said everyone on campus was shocked.

Hasina, who has been ruling Bangladesh for nearly a decade, came to power for a third straight term following elections in December 2018 that opposition parties denounced as rigged in her favour. Her government has faced criticism for curbs on free speech and crackdown on dissent.