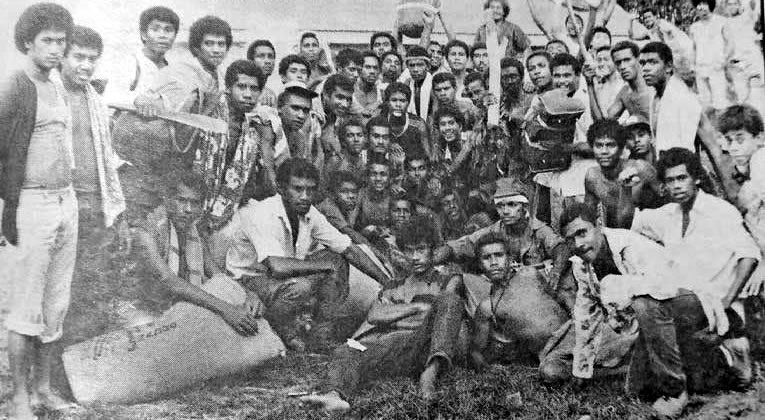 Boycotting students of Navuso Agriculture School who were suspended by the school board. Picture: FILE

In 1984 the Navuso Agriculture School board suspended 120 students who went on strike to protest against what they termed was a lack of action on their grievances.

The students received a circular from the school board saying that all students boycotting normal school programs were suspended.

The school board also told the students to leave the school compound by 3pm on the day the decision was made.

A student spokesman, Peni Volavola, said they decided to boycott classes because nothing had been done about their grievances.

He said they had been promised the complaints would be examined.

The students had earlier gone on strike, on March 12, to protest against increased fees and extra work demanded by the school.

They returned to school a day later.

The students who were from Fiji and Tonga, were taking a three-year course in tropical agriculture.

Mr Volavola said the students were upset over school fees being increased from $110 to $240 and a lack of change in the running of the school.

He said they had also complained they were not getting what they had been promised – such as schoolbooks, eating utensils and free food.

Mr Volavola said that after the strike they got school books, eating utensils and free food.

“But we are more concerned about the other grievances which have not been solved or investigated,” he said.

Mr Volavola said they had a series of complaints against the principal, but nothing had been done about it.

“The students want the principal to be dismissed and if that is not done, we will not return to school.”

The students packed their bags and left school about 3pm.

In the circular the students received from the school board, they were told that normal school programs would resume on May 15 ( the second term).

A spokesman for 12 Tongan students who did not boycott classes told The Fiji Times that they had been asked by the board to find other accommodation until the school returned to normal.

The school’s farm manager, Michael Harness, said the principal, Mr Raumakita, was not available for comment, He said the school board chairman Mosese Vunivutu would contact The Fiji Times.