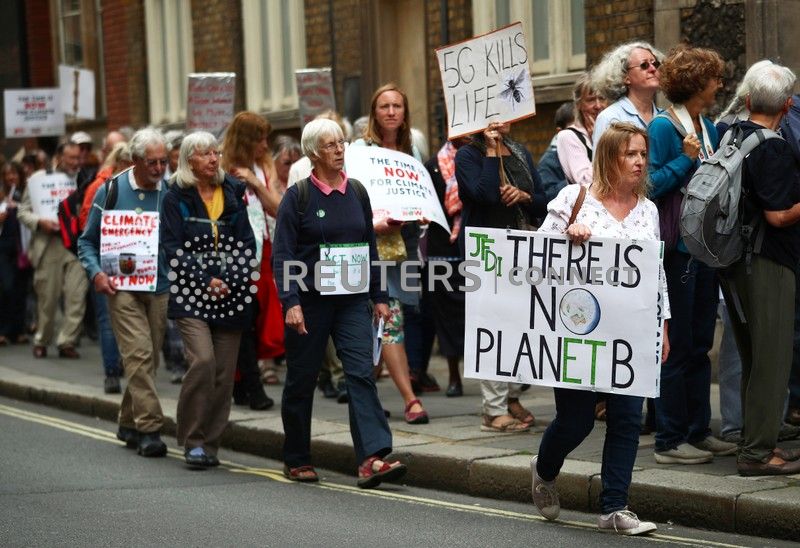 The protest was the latest sign of an upsurge in public concern over the climate crisis, spurred by reports of extreme weather from around the world and increasingly urgent warnings from scientists over the risk of climate breakdown.

“Normally governments are worried about public opposition if they move too far, too fast. But I think they’re misreading the mood, they could be going faster and further,” Caroline Lucas, Britain’s sole Green party member of parliament (MP), told Reuters at the event.

In the largest environmental lobby held at the British parliament, delegations from across the country met at least 200 MPs, according to organisers at The Climate Coalition and Greener UK, which combine more than 130 environmental groups.

Although Britain’s carbon emissions are now tiny relative to big polluters such as China and the United States, the public mood in the country could have wider significance for global climate diplomacy.

Britain is the favourite to host a major conference to drive forward the 2015 Paris Agreement to curb greenhouse gas emissions in late 2020 and negotiators are looking to the government to set an example for other countries to follow.

“If the UK can demonstrate that it’s a leader, then that’s going to encourage others,” said Clara Goldsmith, campaigns director at The Climate Coalition.

Britain this month became the first G7 country to adopt a legally-binding target to reduce net carbon emissions to zero by 2050, a move with far-reaching implications for energy, transport, food, agriculture and other sectors.

Nevertheless, campaigners say the government’s support for fracking and a third runway at London’s Heathrow Airport raise questions about its commitment to a low-carbon future.

“The human race is trashing the planet and there seems to be some momentum to take action,” said Mike Watters, a retired town planner who travelled to parliament from the town of Milton Keynes. “We hope to influence our MP to see it that way.”