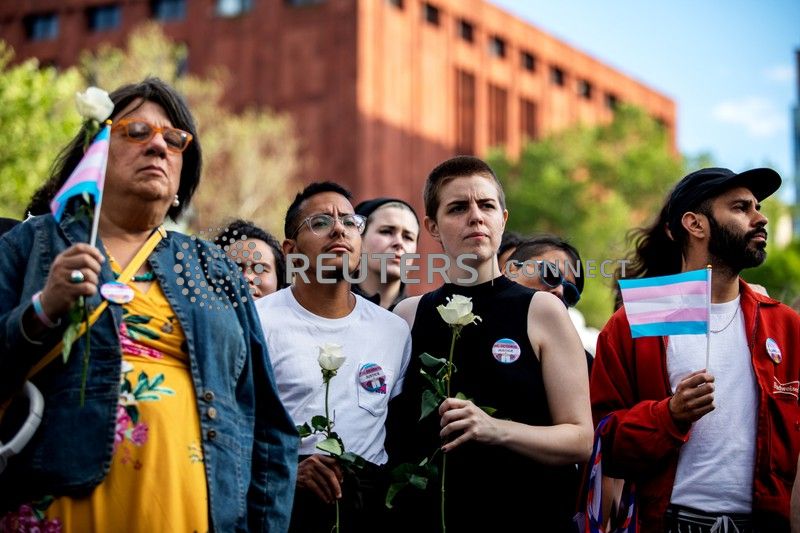 People protest the killings of transgender women this year during a rally at Washington Square Park in New York, U.S., May 24, 2019. REUTERS/Demetrius Freeman

NEW YORK (Reuters) – Protesters chanting “black trans lives matter” and “we will not be erased” on Friday demanded an end to the killings of black transgender women in the United States and decried the Trump administration’s proposals to reverse transgender rights.

Three black transgender women died of gunshot wounds within five days this month in Cleveland, Dallas and Philadelphia, and five total have been killed this year. Transgender advocates complain that police often give such cases insufficient priority or they go unreported when police identify victims by their gender assigned at birth rather than the person’s gender identity.

By coincidence, President Donald Trump’s administration took action this week that would deny or reduce services to transgender people.

Five silent protesters in New York stood veiled and dressed in white on Friday, holding portraits of the five transgender women killed this year, while the crowd sang protest verses, chanted slogans and hoisted signs demanding “Justice!” and “Speak out, stand up for black trans women.”

“I am tired of my sisters being killed,” protest leader Tanya Asapansa-Johnson Walker of the New York Transgender Advocacy Group told about 200 demonstrators in Washington Square Park.

The three shot dead most recently were Claire Legato, 21, in Cleveland, who died on May 15 from gunshot wounds a month earlier; Muhlaysia Booker, 23, in Dallas on Saturday; and Michelle Washington, 40, in Philadelphia on Sunday. In April, Booker was beaten in an attack caught on video that was widely shared on social media.

Dallas police said they are investigating a 2018 murder and an April 2019 aggravated assault of transgender women under similar circumstances but have not established a link. Police in Philadelphia and Cleveland have arrested suspects in each of those cases but say they are not treating them as hate crimes.

At least 26 transgender women were reported killed in 2018 and 29 in 2017, according to Human Rights Campaign, the largest U.S. advocacy group for lesbian, gay, bisexual and transgender (LGBT) people.

Among the measures taken by Republican Trump’s administration this week to curtail LGBT rights was the U.S. Department of Health and Human Services (HHS) on Friday proposing a rule that would roll back protections for transgender patients under Obamacare. The HHS under Trump said protections against discrimination on the basis of sex did not apply to transgender people.

On Wednesday, the Department of Housing and Urban Development proposed a new rule allowing homeless shelters to turn away transgender people for religious reasons.

Earlier this month, HHS released a final rule allowing healthcare providers to opt out of procedures with which they disagree, such as abortions and treatment for gay and transgender patients.

The policies are meant to appeal to Trump’s conservative and religious supporters who helped get him elected in 2016 and who have kept his approval ratings above 40 percent.