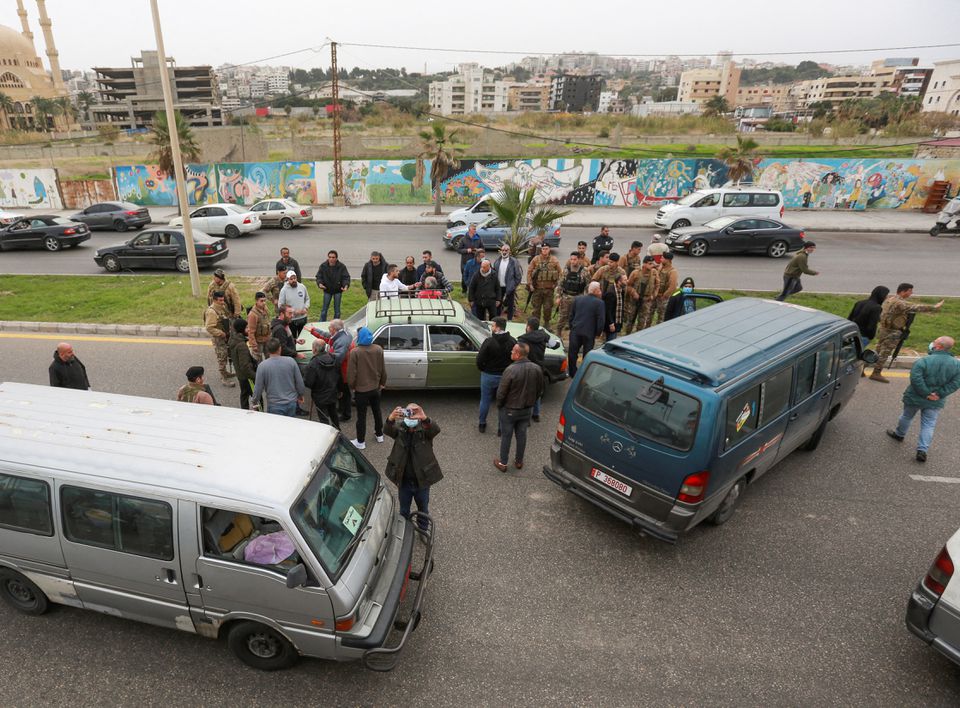 Lebanese army soldiers deploy in an attempt to open a road blocked by drivers during a protest against spiralling petrol prices and worsening economic conditions, in Sidon, Lebanon January 13, 2022. REUTERS/Aziz Taher

BEIRUT, Jan 13 (Reuters) – Lebanese truck and bus drivers and others blocked main roads in the capital and other areas on Thursday in protest at the failure of politicians to address an economic crisis that has sent the currency into tailspin and driven prices sky high.

Lebanon’s pound has collapsed since 2019 when the economy crumpled under a mountain of debt. Yet a cabinet formed in September with a promise to start fixing the economy has not met for three months as rivals argue about the conduct of a probe into the devastating 2020 Beirut port blast.

“I tell everyone that if there is a protest or demonstration against this situation, go to the street. If we wait for our leaders or parties, no one will care,” said Mohamed al-Muqdad, 58, at a demonstration at a main intersection in a Beirut suburb.

“I want any official – the president, the prime minister, the speaker of parliament – to try to live for one day with the salary of a poor worker. Let’s see how they will do it,” he said as dozens of trucks blocked traffic.

The Lebanese pound, which was freely exchanged in shops and banks at 1,500 to the dollar until the crisis erupted in 2019, has crumbled and was trading on the unofficial market on Thursday at about 31,500.

A once comfortable middle class salary can now barely feed a family.

“The rise in the exchange rate … caused very big problems. It made the Lebanese hungry, it made all citizens poor, citizens can’t afford filling up with fuel anymore. People can’t afford buying bread or food. Where are we heading?” said Fadi Abou Chakra, spokesman for Lebanon’s fuel stations union.

President Michel Aoun has been trying to galvanise the multiple sectarian factions to hold a national dialogue conference, but talks this week so far only drew support from close allies. Some opponents said such a conference should wait until after a May parliamentary election.