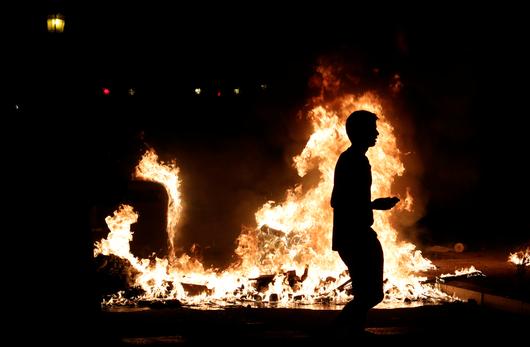 A demonstrators walks past a fire during protest after a verdict in a trial over a banned Catalonia's independence referendum in Barcelona, Spain, October 16, 2019. REUTERS/Albert Gea

BARCELONA (Reuters) – Protesters set cars on fire and threw petrol bombs at police in the Spanish city of Barcelona on Wednesday, intensifying unrest sparked by the sentencing of Catalan separatist leaders who had sought to declare an independent state.

Divisions over a drive to split the northeastern region of Catalonia from Spain roiled the country in 2017, and re-surfaced on Monday when the Supreme Court sentenced nine politicians and activists to up to 13 years in jail.

Peaceful demonstration throughout Wednesday deteriorated after nightfall into clashes between police and protesters, prompting regional government leader Quim Torra to demand an immediate return to normality.

“We condemn violence,” Torra said in a televised address after midnight, according to a translation of the Catalan language provided by Spain’s state broadcaster.

“We cannot let these incidents happen in our country. This has to stop right now.”

Acting Prime Minister Pedro Sanchez said the government would act firmly and proportionately, and in concert with other political parties.

“The Catalan people and all of Spanish society must know that the government is considering all scenarios,” Sanchez told a news conference in Madrid.

He added that the government had set up a special commission including the national intelligence agency to advise it on how to manage the situation.

Sanchez will lead his Socialist Party to Spain’s second election this year on Nov. 10 under pressure from right-wing parties to be tougher on Catalonia and take control of the region’s security forces.