Progress made at COP25, despite lack of agreement to increase climate ambition 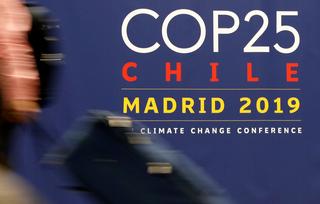 A woman carries her luggage past a sign of the U.N. Climate Change Conference (COP25) in Madrid, Spain, December 14, 2019. REUTERS/Nacho Doce

MADRID, 16 DECEMBER 2019 (UN NEWS CENTRE) – Negotiations at the COP25 UN climate conference in Madrid finally ended on Sunday, wrapping up an event which saw much progress made by the private sector, and by national, regional and local governments. However, there was widespread disappointment that no overall consensus was reached on increased climate ambition.

UN chief António Guterres expressed his feelings on Twitter, but refused to see the conference as a defeat, and wrote that he is “more determined than ever to work for 2020 to be the year in which all countries commit to do what science tells us is necessary to reach carbon neutrality in 2050 and a no more than 1.5 degree temperature rise”.

However, by Friday, when the conference had been expected to end, agreement on some important issues had been reached by negotiators, for example on capacity building, a gender programme, and technology, but an overall deal was held up over disagreement on the larger, and more contentious issues dealing with loss and damage caused by man-made climate change, as well as financing for adaptation.

Weary negotiators worked through Friday night, at the request of the Chilean president of the COP, but a draft version of the outcome text released on Saturday morning was reported to have underwhelmed all parties to the negotiations, with representatives of NGOs and civil society describing it as unacceptable, and a betrayal of the commitments made under the 2015 Paris climate agreement.

At 3pm local time on Saturday afternoon, a press conference was held by the COP organisers, explaining that the negotiators were still hard at work, aiming to “show the outside world that we can deliver, that multilateralism works.”

By Saturday evening, there was still no sign of a deal, prompting acclaimed 16-year-old activist Greta Thunberg, one of the high-profile speakers at the Climate Action Summit held at UN Headquarters in September, to announce that “it seems like COP25 in Madrid is falling apart right now. The science is clear, but the science is being ignored”.

Despite the disappointment voiced at the contents of the outcome document, several announcements made during the two-week conference to indicate progress. The European Union, for example, committed to carbon neutrality by 2050, and 73 nations announced that they will submit an enhanced climate action plan (or Nationally Determined Contribution). A groundswell of ambition for a cleaner economy was also evident a regional and local level, with 14 regions, 398 cities, 786 businesses and 16 investors are working towards achieving net-zero CO2 emissions by 2050.

Discussions held during COP25 broadened the understanding of the science behind the climate crisis, and the critical need for urgency: the UN Global Compact, which works with the private sector, announced that 177 companies have now agreed to set science-based climate targets that align with limiting global temperature rise to 1.5°C above pre-industrial levels and reaching net-zero emissions by no later than 2050. That is double the number of companies that signed up to the pledge at the Climate Action Summit, representing private sector emissions equivalent to the annual total CO2 emissions of France.

Scottish bagpipes were heard in Madrid on Friday, marking next year’s climate conference, to be held in Glasgow, Scotland. COP26, due to be held in December 2020, is being touted as an important milestone in the fight against climate change, because countries will be expected to present upgraded national climate plans, that go beyond commitments made under the 2015 Paris Agreement.