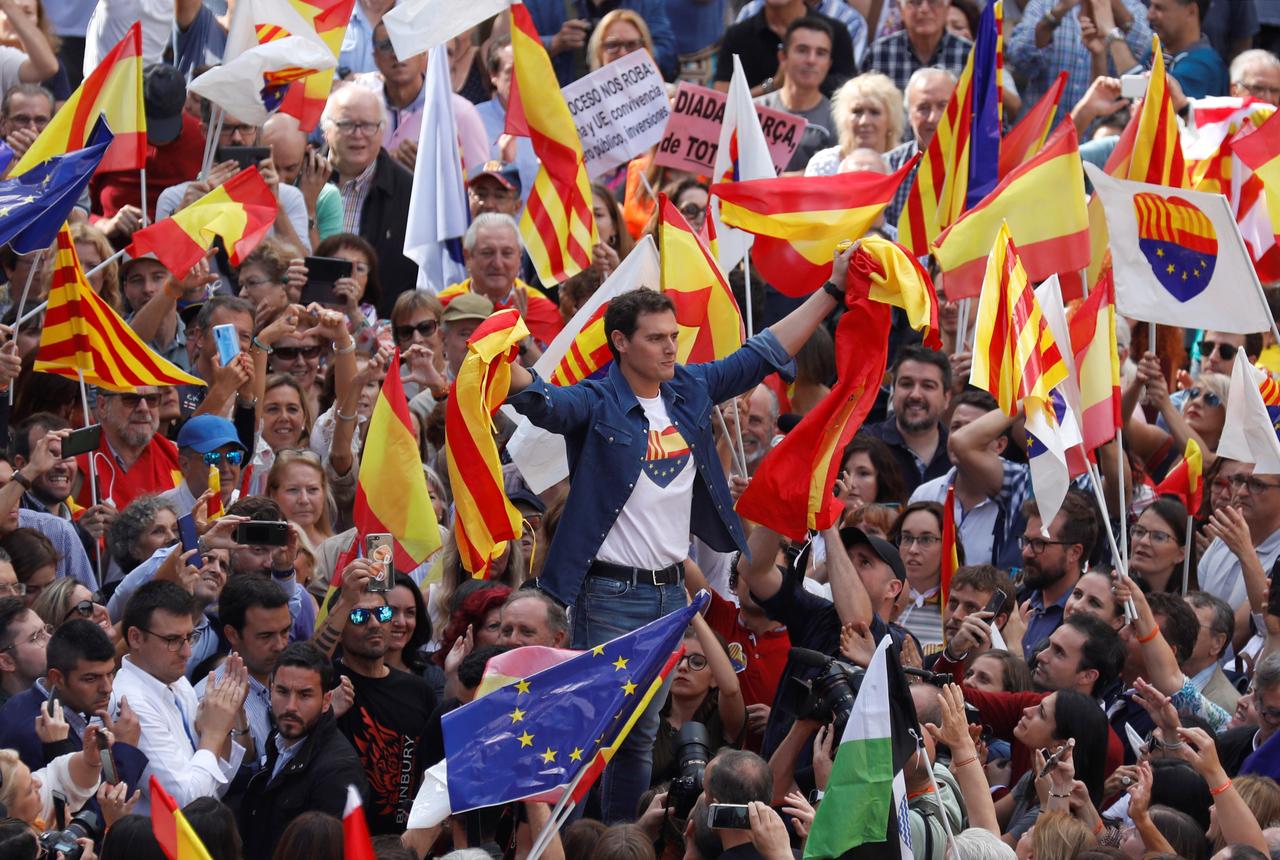 Ciudadanos party leaders Albert Rivera, Ines Arrimadas and Lorena Lordan attend a demonstration in support of the unity of Spain at Sant Jaume square outside of Government of Catalonia headquarters in Barcelona, Spain, October 20, 2019. REUTERS/Rafael Marchante

BARCELONA (Reuters) – Hundreds of pro-independence protesters took to the streets of Barcelona for a seventh successive night on Sunday, with anger over the jailing of Catalan separatist leaders showing little sign of abating.

One large crowd blocked a road close to the Spanish government headquarters in Catalonia, throwing dozens of sacks of rubbish in front of stationary police vans. A smaller group shut off a major avenue to the east of the city.

However, there was no sign of the violence that has shaken Barcelona in recent days, particularly on Friday, when masked youths set fire to hundreds of garbage bins and hurled rocks, stones and bottles at security forces.

“We are people of peace,” said a sign held up by demonstrators on Meridiana Avenue.

“The riots are diminishing, but we are working on stopping them altogether,” said Grande-Marlaska.

Barcelona Mayor Ada Colau said a policeman and a protester remained in a critical condition, adding that “several people” had been blinded in one eye by police rubber bullets.

Independence is a highly divisive issue in Catalonia, which is Spain’s wealthiest region and has 7.5 million inhabitants. A poll in July showed backing for secession at its lowest level in two years, with 48.3% of people against and 44% in favour.

One of the most prominent figures against self-determination, Albert Rivera, head of the pro-unionist Ciudadanos party, staged a counter-protest on Sunday and called for an end to the violence.

Addressing hundreds of flag-waving supporters, Rivera accused Spain’s caretaker Socialist government of not doing enough to stop the chaos in one of Europe’s tourist hotspots.

“People can’t take their children to school, they can’t open their businesses,” Barcelona-born Rivera said. “We need a Spanish government that protects the weak.”

City officials estimate that the rioting has caused 2.5 million euros (2.2 million pounds) worth of damage.

“There are more of us Catalan Spaniards than separatists. It’s important that people see that not everyone is in favour of independence,” said Martina Gonzalez, a 58-year-old cleaner who had a Spanish flag draped over her shoulders.

Sanchez said Catalonia President Quim Torra must first condemn the tumult unequivocally and then build bridges with the many Catalans who do not want secession.

Spanish media reported that Torra tried to talk to Sanchez by telephone on Saturday and again on Sunday but was rebuffed. Torra said in a statement he has always condemned violence.

Pro-independence leaders staged an illegal referendum in 2017 and then declared they were breaking away from Spain. The Spanish government of the time immediately seized control of the Catalan administration and the ringleaders were put on trial.

The Supreme Court on Monday found nine politicians and activists guilty of sedition and sentenced them to up to 13 years in jail, triggering street unrest.

The Catalan question has dominated domestic politics in recent years and was instrumental in triggering parliamentary elections in April, which gave no single party a majority.

The Socialists have called a national election next month, but a poll released on Thursday suggested parliament would remain split. The survey found that support for Ciudadanos was plunging, suggesting Rivera is fighting for political survival.