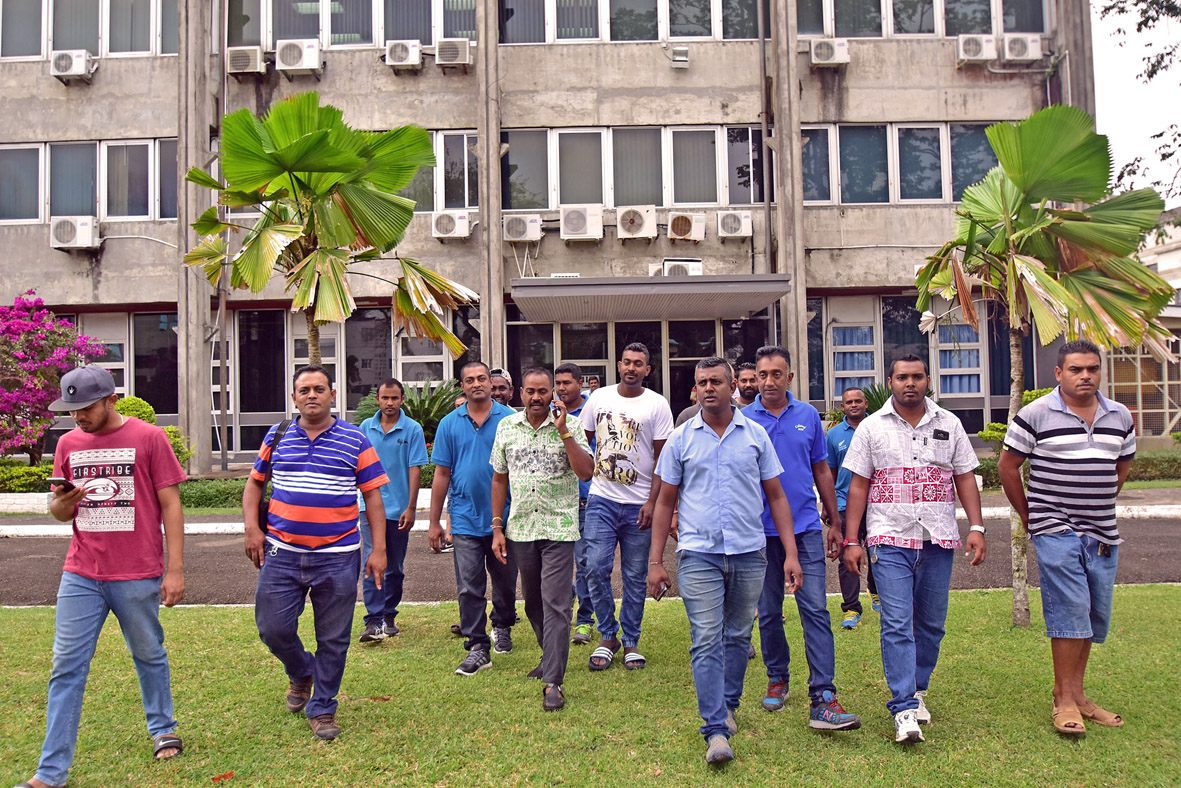 Drivers walking out of the Prime Minister's office in Suva after registering their complaint on Monday, September 3, 2018. Picture: RAMA

MORE than 30 drivers from respective private vehicles who have formed and or joined cooperatives of hire services visited the Prime Minister’s Office in Suva today raising their issues on the seizure of some vehicles by the Land Transport Authority (LTA).

Transling Transfers Cooperation Limited secretary Rohit Kumar, who spoke on behalf of the drivers present today, said at least five vehicles have been impounded by LTA since last Thursday.

“We have been doing this for 30-40 years now. We had a meeting with LTA board members, SCC (Suva City Council) officials and the Ministry of Transport last year and came to a mutual understanding to continue with the services until it was legalised,” Mr Kumar told Fiji Times Online.

“It was all okay until last week when vehicles were impounded by LTA. So far, five vehicles have been impounded from our cooperatives. Now each driver has to pay more than $200 to get their vehicles released and this is a huge amount,” he said.

According to Mr Kumar, they were advised by Minister for Transport Parveen Kumar to visit him at his Suva office at 8.30am today.

When the drivers reached the office, they were advised that the minister was in the Western Division on official duties.

The drivers then decided to register their complaint with the Prime Minister’s Office.

They were then advised to have a meeting with LTA officials, which was expected to be done today.

There are more than 200 drivers who are part of different cooperatives around the country.

The Suva base is at the city foreshore where drivers pay $20 a month as base fee to the Suva City Council.

Drivers also have to pay $1500 for membership in the cooperatives.

The drivers are from Suva, Nasinu, Nausori, Lautoka, Ba and Navua.

The drivers provide transportation services to and from Suva-Nadi-Lautoka-Ba on a daily basis.

Sixty-year-old Mahendra Pratap is one of the five drivers whose car was impounded.

He said life would be difficult if he does not get his car released soon.

“I have my wife and my 10-year-old grandson to look after. This is my only source of income. I am pleading to authorities to please sort something out and release the vehicles,” Mr Pratap said.

According to Mr Pratap, the drivers are facing this issue only in the Southern Division.

“The LTA and police checkpoints in the western division are not giving us any problem. It’s just here in Lami and Suva that we are facing issues.”

Another driver who wished to remain anonymous fearing victimisation said he was tensed as to how he was going to clear payments for his car.

The driver said he had recently took out a new car and was paying monthly instalments from the income generated from this business.

What the Minister says

When contacted earlier today, Minister for Transport Parveen Kumar said he did not schedule any meeting with the drivers for this morning although he did receive a call regarding the issue.

“I did not confirm for any meeting regarding this. A guy did call me up but he was from Nadi. I spoke to him earlier today and he apologised saying that there was a communication error between him and the drivers,” said Mr Kumar.

Minister Kumar has also denied claims that there was a mutual agreement between stakeholders that the drivers could operate without the legal permit.

Land Transport Authority Manager Enforcements Deo Reddy said the drivers needed to get the legal permits to operate and his staff were just doing their job.

“Our main concern is the safety of everyone using the roads,” Mr Reddy said.

“What if an accident happens to any of these cars? Do they realise that they are not covered in any way? They do not pay taxes. They do not have permits. How can they operate?” said Mr Reddy.

He adds that they are not trying to victimise anyone but are just doing what is right.

“Our workers work round the clock to ensure safety on the roads at all times. I receive 10 to 15 calls every day from taxi drivers and van drivers who are operating legally complaining about these illegal operators.”