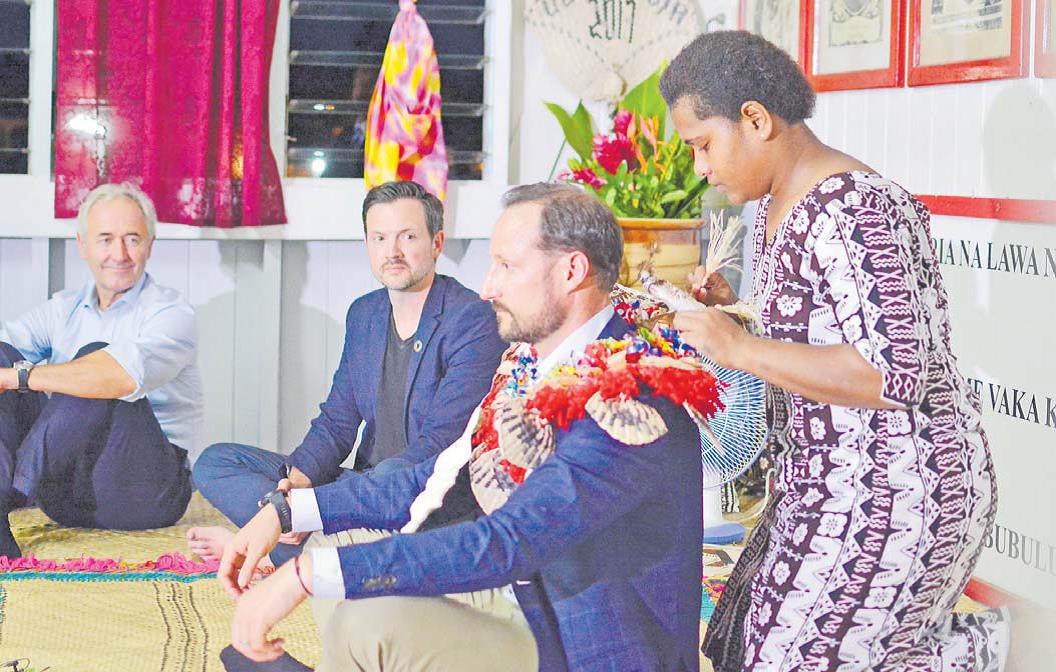 The Crown Prince of Norway Haakon Magnus is garlanded during his visit at Daku Village in Tailevu. Picture: JOVESA NAISUA

FOR a village that is vulnerable to rising sea levels, it was the traditional knowledge of making fans that brought climate change home for the royal visitors during their visit to Daku Village on Tuesday.

The Crown Prince of Norway Haakon Magnus was on his last stop to the village, about an hour’s drive from Suva, to visit climate change projects after a whirlwind two-day bilateral meet.

The royal visit was part of the Crown Prince’s Pacific tour to island nations of Tonga, Fiji and Samoa from April 5 to April 11 to strengthen partnerships with small island states in the South Pacific and the promotion of common interests including seas and climate, peace and security.

Speaking to the villagers, after a full traditional ceremony of welcome, the Prince said he was impressed with the work carried out by the villagers in mitigating climate change and the traditional methods used.

He was then given a brief history on the art of weaving fans by the village representative Salavou Suguturaga who called on the royal delegation to remember their fight against climate change.

Climate change is something the Crown Prince takes seriously.

The Crown Prince once remarked at the devastation caused by climate change on communities and how people’s lives have been affected.

“That makes an impression on me,” he said.

Prince Haakon was then given an array of traditionally crafted fans by the women of Daku as Mrs Suguturaga gave a brief history — the Prince kept looking at the fans and nodded.

“Your Highness, this special fan traditionally belongs to the chiefly family, the Vunivalu of Bau. Only with their permission are we able to sell the fans within Fiji and also overseas,” said Mrs Suguturaga.

“Throughout the whole of Fiji, this village Daku is the only place that weaves this type of fan.

“Your highness, the fans are made out of coconut leaves, boiled, dried and woven nicely into the different sizes with different designs.

“Despite the fact that this special fan has gone out into other parts of the world, that special message is still sacred to us and we are still upholding it until now.

“We, the people of Daku, thank the Lord Almighty for giving us the talent to be able to continue with the skill and knowledge of weaving this special fan which is the pride of our heart.

“Your Highness, though we may be seen as an insignificant group of people, tucked away on the corners of Fiji, hidden among the mangroves, we have pride in our inheritance.

“It is for this that we pray that your royal highness will join us in the fight against climate change,” she said.

Prince Haakon in his speech, earlier to the Fijian PM, said Fiji and Norway may be far apart in geographical terms but it was the warm welcome that made the royal delegation feel welcomed.

“Our countries may be small in terms of landmass, but we are both large ocean states. The oceans are essential to our livelihoods and history. The oceans connect us.”

Norway is expected to host the conference Our Ocean 2019 in Oslo on October 23-24.

Knowledge-based, integrated marine management will be the main theme.