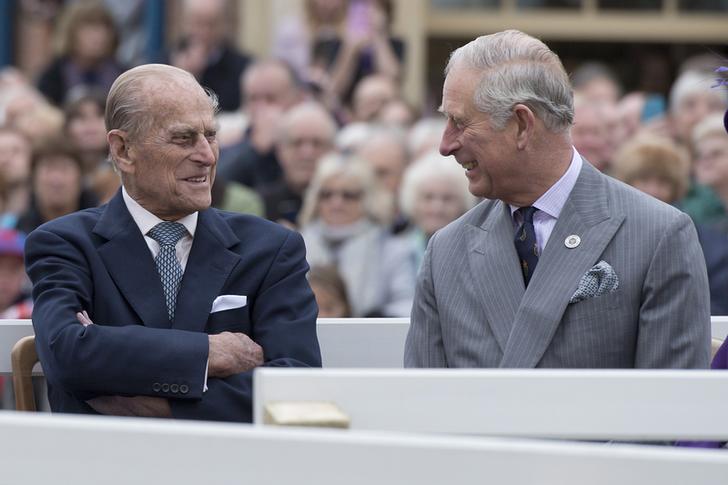 Britain's Prince Philip (L) and Prince Charles listen to speeches before the unveiling of a statue of Queen Elizabeth The Queen Mother in Poundbury, Britain October 27, 2016. REUTERS/Justin Tallis/Pool

WINDSOR, England (Reuters) – Britain’s Prince Charles paid a personal tribute on Saturday to his “dear papa” Prince Philip, saying the royal family missed him enormously and that the 99-year-old would have been amazed at the touching reaction across the world to his death.

Philip, the husband of Britain’s Queen Elizabeth who had been at her side throughout her record-breaking 69-year reign, died at Windsor Castle on Friday.

“As you can imagine, my family and I miss my father enormously,” Charles, the couple’s eldest son and heir to the throne, said outside his Highgrove House home in west England.

“My dear papa was a very special person who I think above all else would have been amazed by the reaction and the touching things that have been said about him and from that point of view we are, my family, deeply grateful for all that. It will sustain us in this particular loss and at this particularly sad time.”

Buckingham Palace announced that the funeral for Philip would be held on April 17, and that the queen’s grandson Prince Harry, who had become estranged from the family after moving to the United States with his wife Meghan, would attend.

Meghan, who is pregnant with their second child, will not attend on doctor’s advice, the palace said.

The palace said long-established plans for the funeral had to be redrawn and scaled down because of COVID-19 restrictions, but they remained very much in line with Philip’s wishes.

Philip, who was officially known as the Duke of Edinburgh, will be given a ceremonial royal funeral, not a state funeral, as planned before the pandemic. But there will be no public processions, and it will be held entirely within the grounds of Windsor Castle and limited to 30 mourners.

British Prime Minister Boris Johnson will not be among the guests in order to make space for as many family members as possible, his office said.

“The occasion will still celebrate and recognise the Duke’s life and his more than 70 years of service to the queen, the UK and the Commonwealth,” a palace spokesman said.

The funeral, which will be broadcast on live television, will be held at the castle’s St George’s Chapel and will be preceded by a minute’s silence across the country.

Charles and other members of the royal family will walk behind a specially-modified Land Rover, which Philip helped design. At the conclusion of the service, Philip will be interred in the Royal Vault.

Exact details of who will attending were not released, but among those present will be Harry, the Duke of Sussex, whose explosive interview with Oprah Winfrey alongside Meghan last month plunged the royal family into its greatest crisis in decades.

During the interview, Meghan said her pleas for help while she felt suicidal were ignored and that one unnamed member of the family had asked how dark their unborn child’s skin might be. Harry also bemoaned his family’s reaction to their decision to step back from official duties and move to Los Angeles.

“The Duke of Sussex is planning to attend,” the palace spokesman said. “The Duchess of Sussex has been advised by her physician not to travel. So the Duke will be attending.”

Buckingham Palace stressed the service would be held in line with government coronavirus guidelines, meaning members of the royal family, including the queen, would be expected to wear a mask.