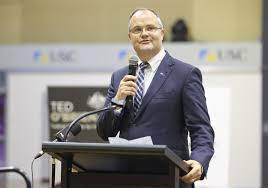 Queensland politician and special envoy for the 2032 Olympics and Paralympics Ted O'Brien. Picture: INSIDE THE GAMES

CANBERRA, 12 OCTOBER 2021 (INSIDE THE GAMES) – Queensland politician and special envoy for the 2032 Olympics and Paralympics Ted O’Brien has been slammed by the state’s Health Minister Yvette D’Ath after suggesting that the Federal Government could withdraw its half of a AUD5 billion ($3.6 billion/£2.6 billion/€3.15 billion) funding agreement for the Games.

O’Brien’s comments came following a disagreement about the make-up of Brisbane 2032’s 22-person Organising Committee, which is yet to be formed.

“My key concern is the suggestion that the Premier may amass an extraordinary amount of power in the appointments and therefore control of the organisation,” O’Brien said, per the Courier-Mail.

Palaszczuk could be allowed to choose up to nine directors for the Board, while the Federal Government only has four selections, the Brisbane newspaper reports.

“If the Premier wishes to impose her will in breach of the federal and state agreement I will be left with no choice but to recommend to the Prime Minister that we withdraw from the 50-50 partnership – everything will go,” O’Brien added.

“If the Organising Committee can be effectively driven by one person Queenslanders would be the ultimate losers.”

Legislation which would see the Organising Committee created has not yet been passed by the Queensland Parliament, with O’Brien reacting to a draft bill.

O’Brien was appointed by Prime Minister Scott Morrison as his special envoy on Olympic and Paralympic planning last month, and his comments have not gone down well with Queensland’s ruling Labor Party.

“I think Scott Morrison is probably feeling very embarrassed this morning that one of his Government’s members came out attacking a draft bill,” Leader of the House of Queensland and Health Minister D’Ath said, as reported by the Sydney Morning Herald.

“I understand Ted has already stepped back from that this morning and said Senator Colbeck is going to look after that.

“He [Senator Colbeck] is the federal Sports Minister and we have been having conversations with him.”

Earlier this week, Palaszczuk appointed herself as Minister for the Olympics.

The role will see her leading the State Government team overseeing planning for Brisbane 2032.

Sport and Tourism Minister Stirling Hinchliffe was named as Minister Assisting the Premier on Olympics and Paralympics Sport and Engagement, while Treasurer Cameron Dick takes the title of Minister for Trade and Investment.

The International Olympic Committee also made a significant appointment relating to Brisbane 2032 this week, with Kirsty Coventry named chair of its Coordination Commission for the Games.