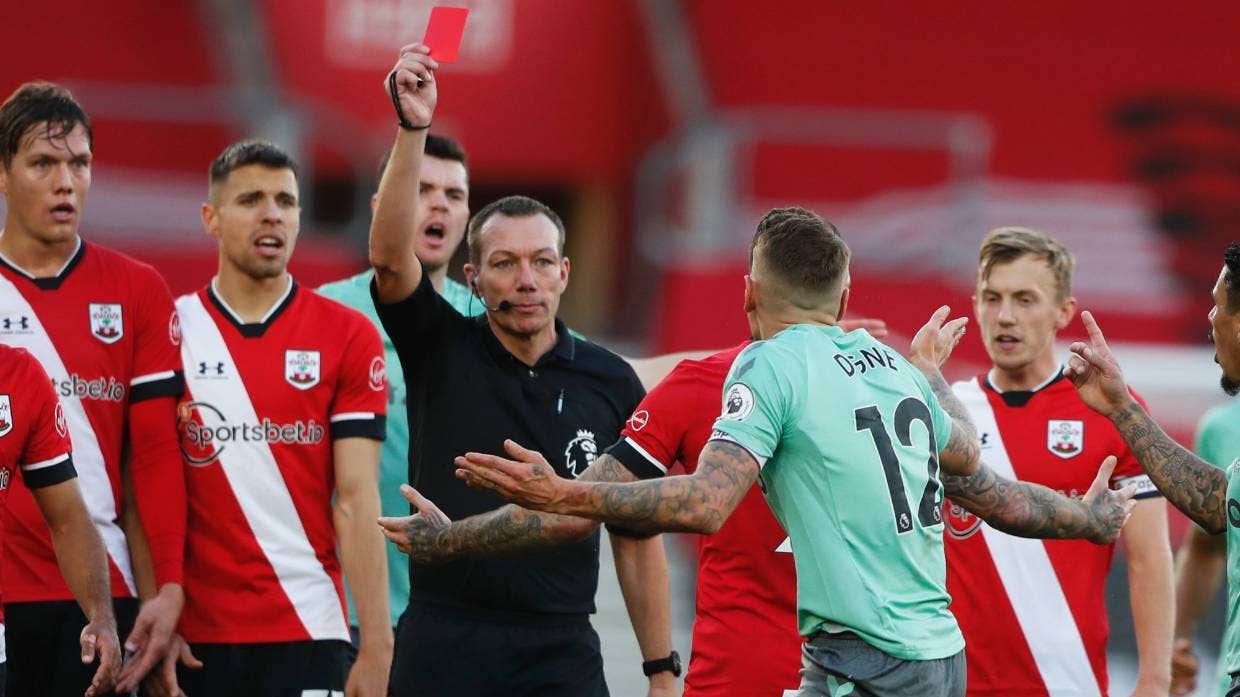 Premier League leaders Everton slumped to their first defeat of the season and lost Lucas Digne to a second-half red card as Danny Ings inspired Southampton to a 2-0 win at St Mary’s Stadium on Sunday (Monday NZT).

Ings is Southampton’s top scorer this season but he turned provider against Everton, setting up James Ward-Prowse’s 27th-minute opener with a delicate through-ball and then crossing to the far post for strike partner Che Adams to score a deflected finish in the 35th minute.

Everton’s worst display of the season was capped by the 71st-minute sending-off of left-back Digne, who raked his studs down the back of Kyle Walker-Peters’ leg as he chased after the Southampton right-back. Two seasons ago, Digne scored a 25-metre own goal in a loss at Southampton.

Everton manager Carlo Ancelotti said the decision to send off Digne was a “joke” and he appeared to suggest the match officials had been influenced by the publicity surrounding the reaction to tackles made by Everton’s Jordan Pickford and Richarlison against Liverpool in the Merseyside derby last week.

“Maybe all this talk all week against Pickford, against Richarlison, affected the decision” Ancelotti said, “and if so it’s not right, it’s not fair. We will appeal, for sure.”

Everton, who won their first four league games and drew their fifth against Liverpool last weekend, stayed top of the standings. However, only goal difference separates Everton from their Merseyside rivals Liverpool.

It was a first loss for Carlo Ancelotti’s team in nine games in all competitions and the visitors really missed the pace and directness of left-sided Richarlison, who was suspended after getting sent off against Liverpool.

“I told the players winter is coming and we will have to react,” Ancelotti said.

Southampton have recovered superbly from losing 5-2 at home to Tottenham in their second league game, picking up 10 points from a possible 12 in their next four games and keeping three clean sheets in the process.

Indeed, it was a year ago that Southampton lost 9-0 to Leicester in an even bigger humiliation.

“We did not talk once this week about losing 9-0 … but it was important what we did after that defeat,” Southampton manager Ralph Hasenhuttl said.

“Now we don’t even think about it any more, I don’t care.”

“My team did a fantastic job today,” he added, “from the first moment you could feel that the plan was working and the guys were sticking to it. It was one of the best first halves so far for us.”