‘Preferential support for some media’ 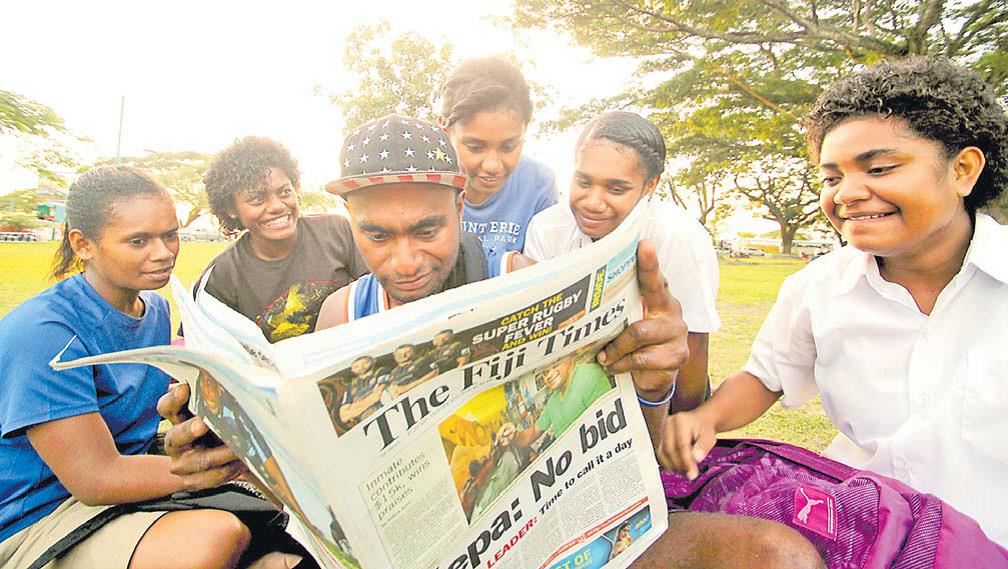 A group of tertiary students read The Fiji Times at Sukuna Park in Suva. Picture: FILE

All good governments try to ensure that markets for products and producers in their jurisdiction are competitive.

This ensures not just efficient allocation of resources, but also some degree of fairness to consumers and firms.

Fiji has had over the years many organisations formally charged with that duty.

The latest is the Fijian Competition and Consumer Commission (FCCC) for the economy as a whole.

For the media specifically, the Media Industry Development Authority is supposed to play a role.

Nevertheless, for several years now, the members of the Fiji public who value media freedom have publicly complained that The Fiji Times has not been getting “a fair go” from the Bainimarama Government, relative to its competitors, certainly where Government advertising is concerned.

After all it is us as taxpayers who pay for it.

Pro-Government voices have dismissed these complaints as being inspired by the Opposition political parties.

But that cannot be said of a former Bainimarama Government speech-writer, Graham Davis.

For many years (until recently) he was responsible for writing speeches for the Prime Minister via his employer Qorvis, an American public relations company.

Since then Davis has been waging a frenetic campaign on his blog (Grubsheet Feejee) to encourage Prime Minister Bainimarama (who he still supports passionately) to eject a specific Government Minister from his Cabinet (let’s call him “Minister X”).

Only then, Davis argues, can the FijiFirst party win the next election. This article does not delve into the dynamics of the complex relationships between Davis,the PM, Minister X and the shadowy but unspecified “Military Council” – nor into the substance of their debates and tensions, fascinating as they are.

I focus here only on the “collateral revelations” by Graham Davis, the former insider, about the pro-government media and their senior journalists, their relationship to the Bainimarama Government and their preferential treatment in the media industry.

This in turn requires the Fiji public to demand what the FCCC and MIDA are doing in allowing this state of affairs to continue, and perhaps even on the role of FICAC in exercising, however indirectly, a negative influence on the freedom of the media.

The start of the fracas

To bring unaware readers up to speed, these revelations by Graham Davis appeared in his personal blog, Grubsheet, revived after a six-year layoff when he became employed by Qorvis to work for the Government. I do not discuss and make no judgement on the substance of Davis’ arguments, extraordinary as they are, but merely quote from his blog. In his Grubsheet post “The Military’s secret blueprint for change” (10 Sep. 2020), Davis writes that following the near-defeat in the 2018 Elections, the shocked Prime Minister summoned the “Military Council”. These, says Davis, are the people the PM trusts the most and who are still “the ultimate authority in Fiji”. “Despite the return to parliamentary rule in 2014”, he says, “the military remains all powerful in Fiji”. “As the 2013 Constitution puts it: ‘It shall be the overall responsibility of the Republic of Fiji Military Forces to ensure at all times the security, defence and well-being of Fiji and all Fijians’.” The Military Council apparently placed all responsibility for the near defeat of the FFP at the 2018 Elections at the door of Minister X. So what did the Military Council call for as the solution, according to Davis? “First and foremost, the Military Council document calls for the removal of Minister X.. [and for him] to be stripped of his other
portfolios … too many portfolios under one minister has created a perception that Minister  X has full control of Government, the document states.” In the next post, Davis stated that Bainimarama’s
successor was to be another former RFMF officer, another Minister in the Bainimarama Government, and not Minister X, clearly the most powerful and influential Minister in the Bainimarama Government.

The Fiji public became fully aware of the sensitive Greubsheet revelations when there was a Fiji Sun front-page story last week: “PM HITS BACK AT DAVIS’ GOSSIP”.  Graham Davis reported the PM’s response. “Stung by successive Grubsheet articles revealing how the military wants  changes to the government,” he wrote, “and also revealing the name of his designated  successor, PM Bainimarama has
made an astonishing personal attack on me on the front page of the government controlled  Fiji Sun newspaper and in the government-controlled Fijian Broadcasting Corporation.”  Davis also quoted directly exactly what PM Bainimarama had to say about him,  as reported in the media (which I do not
discuss, however interesting) and his own rebuttal of the PM’s words (again, very  interesting).
But the comments on the pro-Government media become sharper with Davis’s  next post – highly critical of the Fiji Sun reporting on the contents of a Fiji Sun opinion poll.

Following its sponsored opinion poll by “Western Force Research”, the Fiji Sun  had a lead story by its senior journalist Nemani Delaibatiki – “Labour Big Winners  in New Poll”. Davis described this as “the relatively unremarkable news”. The “the truly big news”, he said, was the collapse of the government’s vote, along with a 10 per cent fall in personal support for the PM. The Fiji Sun article said that the poll
results indicated that according to the 1000 persons interviewed (of unknown  representation), 41 per cent thought that SODELPA would win the 2022 elections. FFP had slipped to 37 per cent. The same poll results indicated that support for Mr Bainimarama as Prime Minister had also fallen from 43 per cent to 33 per cent. But more relevantly Davis criticised the Fiji Sun’s reluctance to highlight the
decreasing popularity of the Bainimarama Government and the PM personally.  Davis noted: “True to form, the Fiji Sun has tried to please its political masters in government … In an “analysis” piece that
reeks of the customary Fiji Sun spin…”. Wow. “Customary Fiji Sun spin”.  These are strong words indeed, coming from a former Qorvis operative. Attacking the Fiji Sun interpretation of the PM’s comments about him, GrahamDavis noted: “Yes, Nemani. Anything  you say… It’s just that you are not
a journalist, but a government propagandist. “And the difference between you and me is this: When I was at Qorvis, everyone new it. But with you, it’s clandestine – the dirtiest secret in the Fijian media.”
Not really a secret, is it? In an earlier Grubsheet, Davis accuses FBC, which carries a considerable amount of Government-guaranteed loans, of a pro-Government slant.  Wherefore art thou: FCCC and MIDA? So this former government insider is clearly brutally critical of the Fiji Sun and  FBC, saying they are not free of government control and bias. Where are the regulating agencies,  FCCC and MIDA, which are formally charged with ensuring that the media industry is not distorted by lack of competition? Common sense would indicate that if the purpose of Government ads (and it would  seem the ads of nearly all other public enterprises) is to reach the largest numbers  in the Fiji public, then should Government ads not be placed in all the major news outlets that could reach the public – including
The Fiji Times? Isn’t the Government’s exclusive advertising patronage of the Fiji Sun a blatant breach of fair competition principles, that the FCCC is supposed to espouse and diligently  strengthen, while eliminating any anti-competitive behavior, if necessary by prosecution?  But the FCCC is nowhere to be seen or heard on the anti-competitive behaviour in the media industry.  If the words of MIDA are to be believed, this institution ought to be devoted to the media industry’s “development”.  This should include at least the objective of fairly encouraging competition among  media outlets on a level playing field with all other competitors. But MIDA (and its once vociferous chairman)  are nowhere to be seen or heard on the Government’s preferential support for some media.  How is this in the real long-term interests of taxpayers and voters of Fiji? Davis opines (and there would be general  agreement from many in the public) that there has been a sad deterioration of governance  standards in Fiji despite the 2006 coup supposedly being a “clean-up” campaign. But what can be, and will be debated until the cows come home, is his allegation that all of the current problems of the  Bainimarama Government are to be laid at the door of just one minister – and if he is ejected from the corridors of power  everything will be hunky dory for the PM who Davis hopes will thereby win the 2022 Election. Hmmmm.