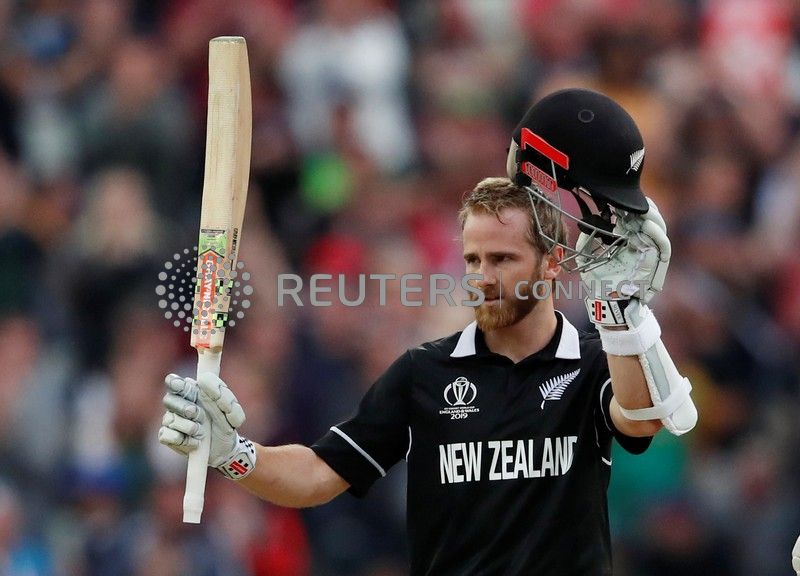 (Reuters) – Plaudits were pouring in for New Zealand’s “gem of a player” Kane Williamson after he displayed ice-cold nerves in guiding his side to a four-wicket victory over South Africa in the Cricket World Cup.

Williamson scored 106 not out as New Zealand reached 245-6 with three balls remaining in their innings, a result that moved them to the top of the table and has left the Proteas virtually out of the running for the semi-finals.

“This Williamson innings today is something else… Under immense pressure he has played an old school gem… What a player… What a Ton …” former England captain and opening batsman Michael Vaughan wrote on Twitter.

Former England captain Michael Atherton also took to Twitter to describe the New Zealand captain as a “gem of a player”, while former fast bowler and cricket journalist Mike Selvey joined the dole of cooing Englishmen.

“There cannot be a batsman in the world less liable to panic than Kane Williamson,” Selvey wrote on Twitter.

There were no signs of Williamson’s pulse quickening on a two-paced pitch that made scoring difficult despite the fact his side had slumped to 137-5 in the 33rd over.

The 28-year-old’s 91-run partnership with Colin de Grandhomme (60) saw their side through to the cusp of victory and Williamson sealed it with a six to bring up his 12th ODI century and tie the scores. He hit a four on the next ball.

“What a marvellous innings from Kane Williamson,” former India batsman VVS Laxman, who is a mentor for the New Zealander’s Sunrisers Hyderabad Indian Premier League team said on social media.

“His calmness stood out in taking New Zealand home.”

Williamson’s steely resolve was not matched by some of New Zealand’s radio and television broadcasters, who nervously conveyed the run chase throughout their early morning bulletins on Thursday as the game reached its conclusion.

Radio New Zealand’s Corin Dann, who had earlier this month confidently predicted New Zealand would win their clash with Bangladesh before a middle-order collapse sparked consternation, said he was refraining from making any predictions on Thursday.

Despite receiving the accolades, Williamson is notoriously self effacing in a country whose default reaction to any praise is an embarrassed, taciturn shrug of the shoulders before a stoic staring at the ground.

He was true to form at Edgbaston, praising de Grandhomme for his contribution.

“The partnership and the knock from Colin was outstanding in terms of swinging that momentum, and he hit the ball beautifully,” he told reporters.

Williamson, however, did receive some criticism for not ‘walking’ when he had appeared to have got a thin edge from an Imran Tahir delivery to Quinton de Kock.

Tahir appealed but the wicketkeeper was not interested and the South Africans did not review the decision. Technology showed Williamson may have got an edge.

“Even Kane said he didn’t feel it,” Du Plessis said.

“That’s not where the game was won and lost.”