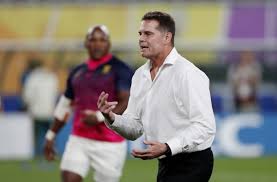 TOKYO (Reuters) – South Africa coach Rassie Erasmus had promised Japan no less than what his team delivered on Sunday as they advanced to the last four of the Rugby World Cup – a gruelling first-half physical battle, followed by a second-half of point scoring.

The Springboks duly beat Japan 26-3 in their quarter-final after only leading 5-3 at the break. By then, however, they had laid the foundation for their win, smashing the tournament hosts in contact to the point where most of the home side were walking wounded by halftime.

After wasting three or four golden opportunities to blow the score out by the break, Erasmus’s side settled in the second and kept Japan pinned in their own half, then took what opportunities their pressure created.

“We were nervous coming in against Japan and with their home support and the way they have played, building momentum,” said Erasmus, who had picked his side specifically to bludgeon Japan into submission.

“Our game plan … was because we experienced them as being fast, the way they play the game with the Ferrari (Kotaro Matsushima) on the wing, it was no secret.

“So we need to keep up with that and match it.”

Intensity was needed from the Springboks if they were to ensure there was no repeat of the ‘Brighton Miracle’, when they were beaten 34-32 by the Brave Blossoms at the 2015 World Cup.

Yet while their defence was outstanding, hitting the Japanese hard and slowing down the speed of their game, their attack will still need to improve in the semi-finals against Wales next Sunday.

They blew three or four tries in the first half alone with poor decision-making and sloppy handling.

“Going in at halftime we were only up a few points and leaving some points out there, there was a lull in the changing room,” Erasmus said.

“But the boys knew which buttons to push to come out of that lull.”

The Springboks’ lineout was a major weapon as they stole five of Japan’s throws, while their rolling maul proved hard to stop with scrumhalf Faf de Klerk’s try courtesy of a 30-metre lineout drive, giving Erasmus confidence for the next two weeks.

“We don’t have to improve in specific departments, it is more we have to concentrate for 80 minutes of rugby. That is where we need to improve to win the World Cup.”